The Museum of Contemporary Art, Los Angeles (MOCA), has now announced the forthcoming exhibition Cinema Vezzoli, highlighting artist Francesco Vezzoli’s mastery in deconstructing the vocabulary of filmmaking and in analyzing how celebrity-driven culture influences art and the public imagination. As part of the exhibition, the Milan-based artist will debut a new work created especially for the exhibition.

Italy in the Arts

Cinema Vezzoli is part of The Trinity, a series presented at three international institutions – the National Museum of XXI Century Arts (MAXXI) in Rome, MOCA and MoMA PS1 – that explores and presents the diverse and fundamental aspects of artist Francesco Vezzoli’s work and development. Organized by MOCA Senior Curator Alma Ruiz, Cinema Vezzoli will be on view from April 27 to August 11, 2014 at MOCA Grand Avenue.

As formerly published, USC Roski School of Fine Arts Professor Ruth Weisberg fondly states, “We are the fortunate viewers of Caryl Christian Levy’s work which shimmers with half hidden and layered sources of inspiration.” Los Angeles’ own “Downtown News” Publisher Sue Laris states of Caryl’s work, “I love the art!” The show is expected to be an extraordinary representation of one of Los Angeles’ most gifted contemporary fine artists.

The Museum of Contemporary Art also has announced the acquisition of 31 important objects to its renowned collection of more than 6,800 works resulting from the efforts of the museum’s Acquisition & Collection, Photography, and Drawings committees and generous giving among artists and other donors. Many of the newly acquired works have been presented in recent MOCA exhibitions, continuing the museum’s deep commitment to showing and collecting works by significant contemporary artists.

Senior Curator Alma Ruiz states, “MOCA’s extraordinary legacy of relationships with collectors and artists in Los Angeles and internationally has enabled the museum to build one of the most important contemporary art collections in the world. The continuing gifts and generosity of our donors are vital to the development of our collection and to our mission to present the most significant art today.”

B: Settings (2010), one of the most important groups of works by Ryan Trecartin and his long time collaborator Lizzie Fitch, was acquired with funds provided by the Acquisition and Collection Committee and a gift of Jeffrey Deitch. This work was presented in the MOCA exhibition Any Ever in 2010, which was Trecartin’s first major solo museum exhibition in the United States.

Steven Hull and Sam Kashani donated three major works: Dumpster (Light Gray with Orange Swoosh) (2012) by Kaz Oshiro and Scarecrow Series (2011) and Giggle of Clowns (2009-2013) by Marnie Weber, an artist with a long relationship with the museum. Giggle of Clowns is now on view in Room to Live: Recent Acquisitions and Selections from the Permanent Collection at MOCA Grand Avenue until March 31, 2014, and the artist is working with the teen participants in the 2013-2014 Louis Vuitton Young Arts Program on a collaborative art project.

Following its presentation in the exhibition Cai Guo-Qiang: Sky Ladder, Cai Guo-Qiang’s Desire for Zero Gravity, March 7, 2012 (2012) was purchased with funds provided by generous patrons and exhibition supporters Julia and Ken Gouw, Eva and Ming Hsieh, and Dominic and Ellen Ng. This is the second gunpowder drawing work by the artist to join the museum’s collection since the remarkable 2007 partial and promised gift by East West Bank of 12 works by contemporary Chinese artists. 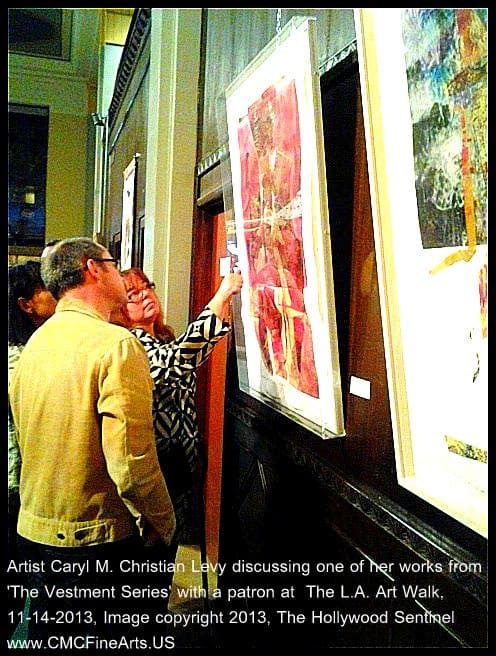 MOCA acquired Rodney McMillian’s Representation of a Landscape as a Wall (2012), his most ambitious work to date. This 48-foot painting on paper, acquired with funds provided by the Acquisitions and Collections Committee and the Drawings Committee, is the third work by McMillian to enter the collection. The museum also purchased a Samara Golden sculpture, Diet Piece: Moral Kinship (2013), acquired with funds from the Acquisition and Collection Committee and Warp Engines (2009) by William Leavitt, purchased with funds by the Acquisition and Collection Committee, Kathi Cypres, and Karyn Kohl, previously presented in the artist’s first solo museum exhibition and retrospective, William Leavitt: Theater Objects at MOCA in 2011. All four works are currently on view until March 31, 2014 at MOCA Grand Avenue as part of Room to Live: Recent Acquisitions and Selections from the Permanent Collection,

Also purchased was 2iPM009 (2009) by Magdalena Fernandez, acquired in joint ownership with Alejandro Ramirez Magana, Mexico. MOCA’s funds were provided by the Jumex Fund for Contemporary Latin American Art. This work will be presented in the artist’s upcoming MOCA exhibition in Fall 2014.

About MOCA: The Museum of Contemporary Art

Founded in 1979, MOCA’s vision is to be the defining museum of contemporary art. In a relatively short period of time, MOCA has achieved astonishing growth with three Los Angeles locations of architectural renown; a world-class permanent collection of more than 6,800 objects international in scope and among the finest in the world; hallmark education programs that are widely emulated; award-winning publications that present original scholarship; groundbreaking monographic, touring, and thematic exhibitions of international repute that survey the art of our time; and cutting-edge engagement with modes of new media production. MOCA is a not-for-profit institution that relies on a variety of funding sources for its activities.

As former Director, Master of Public Art Studies, University of Southern California, Caryl M. Christian Levy succeeds in engaging and educating the public with her evocative lectures, interviews, and inter-disciplinary talks at her own CMC Fine Arts Studio in the heart of L.A.’s historic Chinatown.

As stated on her official website, Caryl M. Christian Levy states; “My practice as a professional artist, educator and public art professional brings together many related disciplines providing a framework for collaborations with artists, cultural institutions, communities and city programs, and the public and private development in the realization of public art projects, programs and site specific commissioned public artworks. I currently lecture, instruct, and conduct workshops and presentations addressing the public realm with the goal of generating new arts policies and guidelines through inclusive community dialogues.”

Caryl continues, “As an artist, my painting and studio work comes from a Midwestern influence during the late 60’s and early 70’s. Most of us working during this decade saw the shift in object to process, the impact upon my studio art manifests in current installations created with my long time art collaborator and husband, John Levy. These monumental installations touch every aspect of my art and performance music background in addition to combining my tendency towards collaborative projects.”

What: Cinema Vezzoli: The Trinity