The Mormon Church vs. The United States of America

Months ago, I was watching Hannity and Colmes. Sean Hannity, who I have great respect for, said something to the effect that “No one should criticize Mitt Romney because of his faith.” Well, Sean, you are one of my favorite people and 99% of the time, I agree with you, however, this time you were really wrong. Let me explain to you and the American people why Mitt’s Mormon faith is precisely the reason why Americans should be deeply concerned.

Let me ask you this: Would you have confidence in a president, in a time of war or otherwise, if he had lived a life of believing deception? Would you feel secure with our president if he not only believed in a fabricated religion, but he also is called by his church to preach this distorted gospel and spread Mormonism throughout the world? Would you feel secure with a president who is bound to follow a false prophet? Do you know that if Mitt Romney does not follow what the prophet of the Mormon Church tells him to do, that he is an apostate and can lose his place in the Mormon afterlife? Would you really feel comfortable voting for such a person to be the leader of this country and the free world?

When Mitt’s Mormon faith is discussed in the media, the standard response is that John F. Kennedy had the same question posed to him regarding his presidency and John’s answer was to assure the American people that the Pope would not be running the country. He assured the American people that his religion and allegiance to the Pope would remain separate from his office of the Presidency.

I think we can all agree that it is important that the leader of the free world has the ability to discern fact from fiction. Otherwise, if he has lived a life of deception, we can conclude that he will continue to be deceived and that his judgment may be distorted. Because the wisdom, judgment and discernment of our President may be crucial to our survival, would it not be prudent to examine his fundamental foundation and beliefs? And if his beliefs are distorted, why would it not be critical to our existence to protect our country from being placed in the hands of such a person?

Let’s look at Mitt’s chameleon tendencies. Mitt is a former supporter of gay unions and abortion. However, in order to qualify as a “conservative,” he has changed his position on both issues. From Mitt’s perfectly placed hair style, to his chiseled looks, to his humble mannerisms, Mitt is properly displaying the “image” that he has been brought up in the church so well to portray.

The spin masters of the church are proficient and seasoned at marketing and displaying the proper Mormon image in which to exhibit to the public. Mitt, his wife and children’s apple pie, attractive, clean and wholesome image is the poster of what a Mormon family is taught to present. Mormon television commercials cast the clean and wholesome image of the smiling family that everyone wants to become a part of in their dreams. What could possibly be wrong with this picture?

A recent change in the Mormon marketing plan has been to claim that Mormons are Christians. This could not be further from the truth. Throughout the years of Mormon history, Mormons never called themselves “Christians” and prided themselves in their claim of “special knowledge” that others, including Christians, did not possess, as well as that the Mormon religion was the one and only true way to heaven. The purpose for this change in which, now, they claim to be Christian, is to mainstream themselves in to the appearance of Christianity in order to recruit unsuspecting Christians to their own religion which will bring 10% of the gross of their incomes to the Mormon Church.

Mitt Romney is a long standing, card carrying, temple Mormon. The Mormon temple is a place where only the most faithful followers of the Prophet and the religion are allowed to enter. In this place, Mormons participate in secret signs and rituals in which, up until the 1990’s, they were sworn by oath to secrecy that if they revealed anything about these temple rituals, this act would be punishable by death. Here is the exact oath: “I will now explain the covenant and obligation of secrecy which are associated with this token, its name, sign and penalty, and which you will be required to take upon yourselves. If I were receiving my own Endowment today, and had been given the name of “John” as my New Name, I would repeat in my mind these words, after making the sign, at the same time representing the execution of the penalty: I, John, covenant that I will never reveal the First Token of the Aaronic Priesthood, with its accompanying name, sign, and penalty. Rather than do so, I would suffer my life to be taken.”

These rituals consist of secret hand shakes, tokens, oaths, secret names and many other bizarre proceedings. 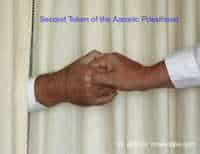 Another of the secret oaths taken is to consecrate your time, talents and everything which the Lord has blessed you, or with which he may bless you, to the Church of Jesus Christ of Latter-day Saints.(do you understand this implication regarding the office of the Presidency of the United States?)

From Richard Peckham’s site: http://home.teleport.com/%7Epackham/temples.htm, it is important to read two additional oaths of death Mormons have made in the secret temple ceremonies:

1. “The First Token of the Aaronic Priesthood is given by clasping the right hands and placing the joint of the thumb directly over the first knuckle of the other person’s hand. The name of this token is the New Name that was received in the washing and anointing ceremony. The sign is made by bringing the right arm to the square, the palm of the hand to the front, the fingers close together, and the thumb extended. The execution of the Penalty was represented by placing the right thumb under the left ear, the palm of the hand down, and by drawing the thumb quickly across the throat to the right ear, and dropping the hand to the side.” (In case you did not notice, this is the sign of slashing your throat)

2. “This Token is given by clasping the right hands and placing the joint of the thumb between the first and second knuckles of the hand. The name of this token is one’s own first given name if going through the temple for one’s own endowment, or, if going through for the dead, it is the first given name of the dead person. The sign is made by bringing the right hand in front, with the hand in cupping shape, the right arm forming a square, and the left arm being raised to the square. The Execution of the Penalty was represented by placing the right hand on the left breast, drawing the hand quickly across the body, and dropping the hands to the sides.” (Again, this is a sign of slashing your chest through the bottom of your stomach)

In case you are wondering about my reliability to write about the Mormon Church, let me just say that I was born and raised in The Church of Jesus Christ of Latter Day Saints, the Mormon Church. I am a former Bishops daughter. I left the church when I was in my 20’s and it has taken me many years to deprogram myself from the false teachings of the church. The Mormon Church is based on a false prophet, Joseph Smith, who was a fortune teller and a money digger before he invented this false religion in order to back up his deviant lifestyle of polygamy and control. The Mormon Church has lied to its members since its origin. Please know that I am not trying to hurt Mitt or any Mormon. There are members of my own family that I love dearly, who are still deceived by the many false teachings of this church.

It is because of my former Mormon upbringing that I can speak to this issue with credibility. In order for you to make an informed judgment about whether Mitt Romney should be the President, you need to know what he believes. Here are just a few of many teachings that Mitt Romney, as well as, Orin Hatch and Harry Reid believe: 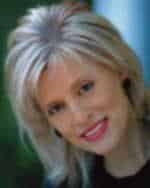 So Sean, maybe after reading this, you may reconsider your statement about Mitt Romney’s faith. I challenge everyone in the US to study and become informed about the beliefs of not only Mitt Romney, but all of the presidential candidates and what they stand for. We are living in dangerous times due to the threats to our very security in this country. We cannot afford to elect a president who is not equipped to discern the truth about his religion, or any aspect of any matters that must be handled in the office of the Presidency of the United States of America.