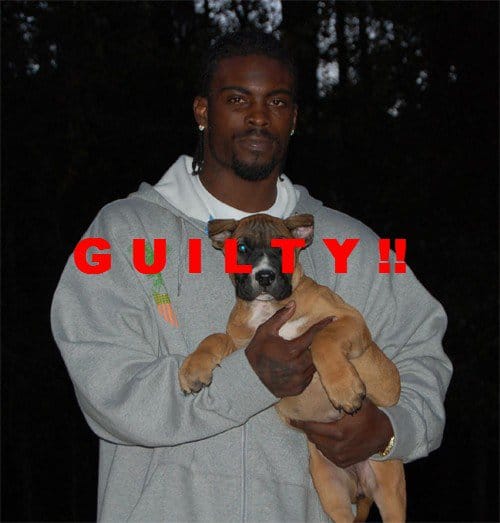 “This is going to be a hard-fought trial… Michael Vick is innocent.”

“He would not have been persecuted that much if he had killed somebody… Yes, there are many dog lovers…but there are also many, many other people who just love Mike Vick and these people, too, are significant in numbers.”

“I’ve found Jesus and asked him for forgiveness and turned my life over to God, and I think that’s the right thing to do as of right now.”

After he was named in a very-detailed, 84-count Federal indictment for hosting dogfights in his home, for funding the entire operation, and for executing losing pit bulls by means of lynching, drowning, electrocution and body slams, MichaeI Vick retained a Dream Team of five, very high-priced attorneys, masterminded by Billy Martin, the same hired gun who recently represented former Dick Cheney hatchet man Scooter Libby.

What else would you expect the highest paid football player in the NFL to do, other than mount a million-dollar defense with his liberty, his reputation, his assets, his job and his endorsement deals on the line? And not until after all his co-defendants had already cooperated with the prosecutor and agreed to testify against him, did Vick even consider copping a plea himself. 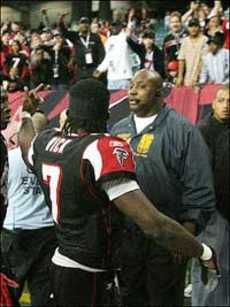 Then, immediately after admitting to just one count of gambling on dogfights, he staged a well-orchestrated press conference to announce that he’d asked Jesus for forgiveness. Anybody buying this? I hope not. Just as Libby successfully lobbied his Republican base to pressure the President to have his sentence commuted, Michael’s Born-Again gambit is clearly designed to appeal to the African-American soft spot for spirituality.

Personally, I resent the suggestion being circulated by the mainstream press that the black and white communities are monolithic entities, which feel very differently about this case. The subtle implication, here, is that African-Americans are feeble-minded and inclined to forgive the mistreatment of man’s best friend, since that’s supposedly not as bad as harming humans.

But it’s obvious that Michael Vick is a very mentally disturbed sadist who got his kicks from killing completely defenseless creatures unable to reason with their master and too innocent to comprehend the reason for his sudden inexplicable cruelty. The only people I can think of who share this kinky inclination are on the long list of serial killers who started out torturing animals, psychopaths with names like Jeffrey Dahmer, David Berkowitz and John Wayne Gacy.

Now that the disgraced Atlanta Falcon QB has confessed, the focus has erroneously shifted to how soon he ought to be allowed to return to the league after paying his debt to society. Maybe we all instead ought to pause for a moment of sanity, because the sobering truth is that Michael Vick is still sorely in need of some serious counseling and rehabilitation, not a slick PR campaign selling the notion that his shedding crocodile tears and converting to Christianity on the courthouse steps means that his high crimes and misdemeanors are already behind him.

Forget football and fame, Mike, just focus on trying to save your soul before it’s too late.