Jones raised $50 million from George Soros and an undisclosed number of mainly California and New York billionaires. Jones then hired Fusion GPS and Christopher Steele to push the mainstream media into publishing the Russian collusion narrative against Donald Trump.

The salacious unverified dossier was used by the Obama FBI and Obama DOJ to obtain a FISA warrant four times, so they could spy on Donald Trump. Remember that Trump said Obama was syping on him? He was right, but $50 goes a long way when you’re bribing the mainstream media to write and print salacious garbage, even if it isn’t true.

It turns out that Obama’s CIA, run by “Mr. Nasty,” John Brennan, spied on Jones at the time Jones was writing a report on CIA torture, while working for Feinstein.

A Congress committee is currently trying to get all communications between Jones’ Penn Quarter Group and Fusion GPS. This is a murky business.

The Democrat bid to bring down Donald Trump has so far been repelled because none of it is true. The Democrats and the Deep State are furious because they can’t control Donald Trump, and that’s why he’s being so effective at tearing down the entrenched corruption in the USA.

It appears Democrats were almost right. There was Russian Collusion. It was democrats colluding with Russians, not Donald Trump and his team.

Look for some amazing revelations over the next few months as #THEGREATAWAKENING gathers pace, more information comes out and arrests take place. 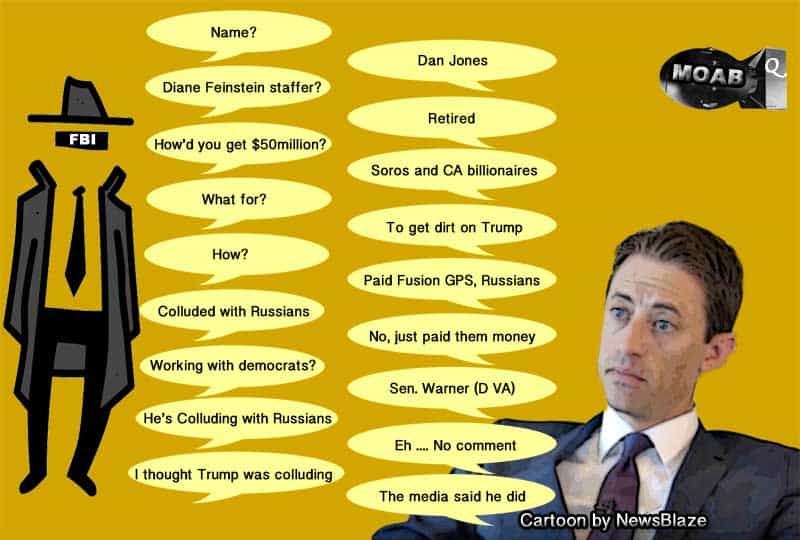