Donald Trump stood up to unbelievable odds to become president. He smacked down the #fakenews media, repelled the dopey democrats, the rancid RINOs, the swamp republicans the swamp itself and crooked Hillary Clinton.

For years republicans have been saying they hate democrats because they weren’t given time to read legislation. So what did they do this week? They passed an omnibus bill that spends money like a drunken sailor, a bill they have not read.

And Donald Trump, champion of the deplorables should have gone to the Republicans last week, to tell them that if it did not contain wall funding, he would veto it. Even though he didn’t do that – and he should have – they should have known that those things should have been in the bill. They didn’t.

Republicans should also have known that Planned Parenthood funding should have been removed. They didn’t do that either.

The omnibus bill is a pile of steaming garbage. And Donald Trump signed it. He should not have. He should have vetoed it, but he didn’t.

The Omnibus is capitulation to the D.C. swamp and it betrays his base. Why did he do it? His excuse is lame. 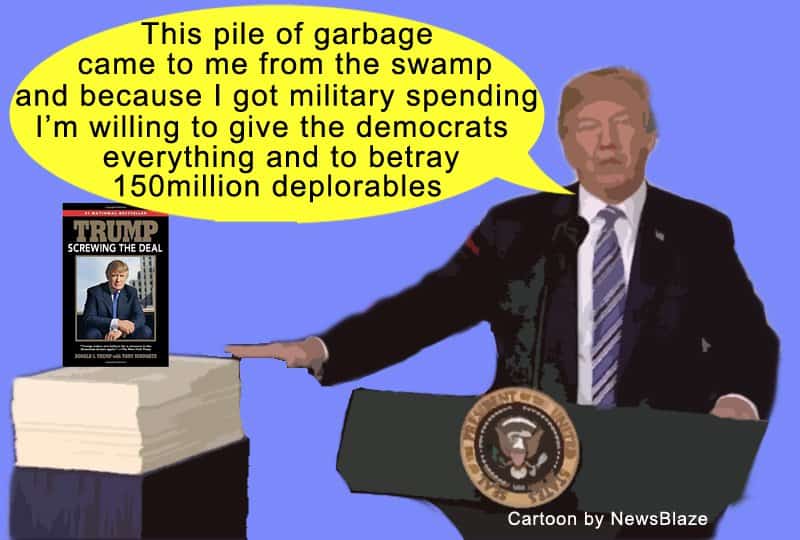 I see only three possible reasons.

1. Something REALLY bad is about to happen such as the crash of the dollar or the stock market and he wanted the military spending set. The fact that is makes no sense as a reason is beside the point.

2. He has another plan to stop this ever happening again.

3. The miltary/National Security funding will pay for The Wall.

But the question remains. Why would republicans, who control the house, the senate and the presidency give everything to the democrats and nothing to Trump and the deplorables?

The weak Republicans who just stabbed Trump and the deplorables in the back need to be kicked out of congress.

Did Donald Trump betray everyone? Or maybe he’s playing chess, and he’s going to fix the problem, but he needs time? Remember, if you are a deplorable, what have you actually done to help him fight against the Deep State? Just saying you support Trump isn’t actually helping him. What he’s doing is hard. It is very hard.

I could easily be wrong, but I think you have to wait to see how this plays out. Don’t give up yet. You know the Democrats, the Deep State, the media and many Republicans are against him. He doesn’t have the power to roll them all over at once. More time is needed.

He needs you, so just hang in.