With the news of revealing emails retrieved from Hunter Biden’s laptop, both Facebook and Twitter jumped into their censorship mode to cover up for Joe Biden’s lies exposed via those emails. On Thursday, Twitter exhibited suspicious activity like removing tweets that go against the establishment and tampering with the “Follow” feature of its users.

The daily drop in the number of my Twitter followers has been my observation for several months and I have seen my conservative contacts on Twitter saying the same of their accounts. But I was alarmed on Wednesday evening when I discovered that Twitter had made my account unfollow President Trump. I hadn’t visited the President’s page in some days and only saw his tweets in retweets from fellow Trump followers. A visit to his page revealed that I was no more following him. And since I never unfollowed him, I concluded it was the work of Twitter – unless someone else hacked into my account somehow, and I believe the second possibility is less likely than Twitter censorship since a login from a different device or suspicious location generates an email alert.

As I took a screenshot of the President’s Twitter page showing me not following him, I didn’t suspect what happened to my tweets. But I’d know that the following evening. I started re-following President Trump on Twitter after I posted the screenshot to Twitter and pinned the tweet to my profile, tagging some popular news anchors and also the President. 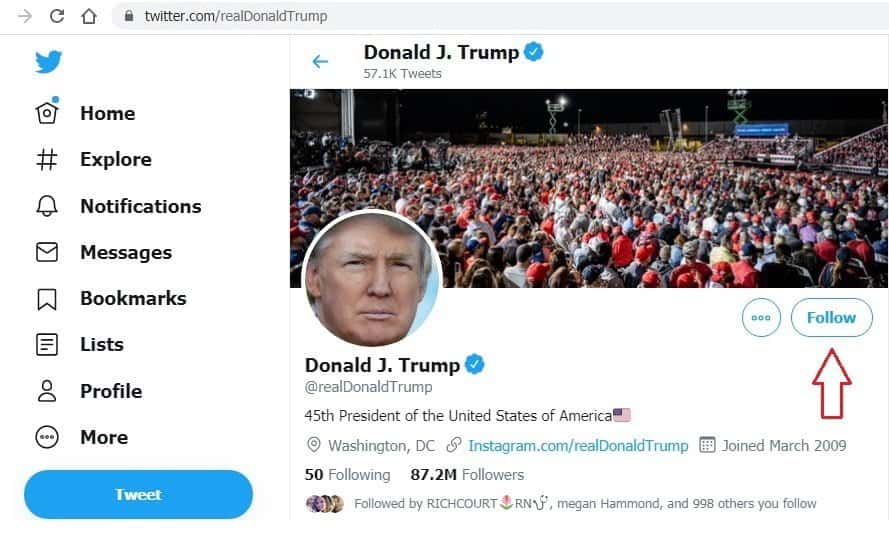 On Thursday evening I when visited my Twitter page, I found out that a number of my Tweets each carrying a link to a news story or opinion piece on my blog Word Matters were missing. I noticed the absence of my October 14th story International Attorneys to Sue the WHO for Lockdowns over Faulty COVID Test that I posted to Twitter, LinkedIn and other social media sites. Like I have been doing with my Twitter posts for some time, I checked the tweet activity of that post on Twitter and it was doing okay. Noticing its absence made me scroll down quickly to check my profile page for older tweets and soon I found out that a number of other tweets had vanished altogether. These included tweets carrying the links:

As the list above shows, my missing tweets include links to posts on my site showing scientific studies on COVID 19, the health risks associated with prolonged use of face masks, Australia’s dictatorial law on forced vaccine testing and administration, and even a post about a recent scientific study on entropy and the second law of thermodynamics.

The disappearance of one tweet of mine particularly caught my eye. It was a link to my review of the pro-life movie The Order of Rights and was posted to Twitter on October 6, the same day I posted the review to my blog. Since I remembered that the Twitter account of the movie had retweeted my review and given it a Like, I visited their page, and there it was: the retweet of my post on their page.

I became convinced that Twitter had tampered with my postings. So I started writing about the experience and also searched the web for retrieving lost or deleted tweets. The info I found in the search results suggested I get an archive of my tweets. On searching for retrieval of deleted tweets, I saw that Twitter allows you to request a download of your tweets history for like a month in the “Your Account” section in your Twitter Settings. I requested a download of my tweet archives and took a break to have dinner and watch a movie.

When I returned to my computer and visited my Twitter profile again, I noticed the missing tweets were all restored-like they never disappeared. Trying to make sense of it, I searched for anything wrong with twitter that day. In the morning I found reports that Twitter had crashed temporarily due to some technical difficulties which led to users experiencing problems tweeting or accessing their timeline. The story says that Twitter announced at 8:11 pm (Eastern) that “things appear to have returned to normal” and that users should be able to normally use Twitter in the next few hours.

Do such technical glitches remove tweets selectively, leaving some and making earlier others or some newer ones disappear? I am not sure. I remain suspicious. What seems certain though is that technical glitches shouldn’t make me unfollow the President’s account. The unfollowing has been happening for months, if not years, and reported by many conservative users of Twitter. It’s also highly suspicious that such a “glitch would happen on the very day when Twitter was on fire with the bombshell New York Post story on the revealing emails retrieved from Hunter Biden’s laptop, a story that leftist mainstream media predominantly ignored and both Facebook and Twitter started censoring soon as it caught traction.

As for my request for the archive of my tweets, I am still waiting to hear from Twitter.

Trump or Clinton? TweetCast Predicts Your Vote by 80%