AccuWeather reports the threat on Hawaii from the tropics will not end with Iselle as Hurricane Julio continues to head to the west-northwest across the Pacific into the upcoming weekend.

Julio is located about 1,000 miles east of Iselle and is forecast to take a path 150 miles north of Hawaii spanning Sunday, Monday and Tuesday. 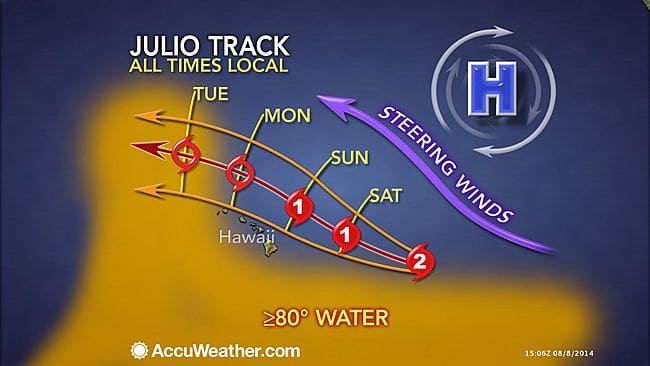 According to AccuWeather Hurricane Expert Dan Kottlowski, “Julio will be passing over cooler waters compared to Iselle and is forecast to weaken to a tropical storm before nearing Hawaii waters.”

The weakening process has begun and follows initial strengthening that took place at midweek. Julio strengthened into a Category 3 hurricane Thursday evening, with top sustained winds of around 115 miles per hour. During Friday morning, Julio had slipped slightly to a Category 2 hurricane.

Based on the expected track and strength of Julio, impacts will be much less severe on the islands as a whole, when compared to Iselle.

However, there will still be a period of rough seas and a few gusty squalls pushing westward across the islands as a plume of showers and thunderstorms is likely to extend south of the system.

“Rainfall could still be locally heavy, especially in the higher terrain as a result of the tropical flow of moisture,” Kottlowski said.

Substantial rainfall and wind conditions may occur on parts of the islands that typically experience little rainfall and light winds. Usually, these areas along the southern and western slopes of the islands are fairly dry and sheltered due to prevailing northeasterly trade winds.

Rain, wind and seas could be more severe from Julio if the system tracks farther southwest than currently expected, so be sure to check back frequently with AccuWeather.com on the storm’s path.

“Although unlikely, if the high pressure area to the north turns out to be stronger, it could force the weakening tropical cyclone to take a path much closer to the Islands,” Kottlowski said.

Such a scenario would be aggravated by Iselle passing nearby a few days earlier. Some communities may still be without power and isolated from the outside world if roads were washed out or blocked by debris.

Iselle hit the Big Island as the strongest tropical system on record. Reliable record keeping of tropical systems began in 1950. There have been multiple threats and impacts from the tropics on the islands several days apart over the past 60 years.