There can be no doubt that immigration is a growing concern in many people’s minds, especially when countries face economic difficulties and rising unemployment (as we are seeing now).

Whilst violent protests are something we should avoid at all costs, which are normally carried out by a small group with extreme views, we should be careful not to assume that these will remain isolated cases.

The recent attacks on Roma gypsy families in Northern Ireland, is a frightening example of something we may see more of in other countries in the near future.

Whilst some have branded the attacks as racist, it is perhaps more accurate to say that the protesters are angry about “foreigners” receiving benefit from a country that they have not supported, and having the chance of obtaining a job at the expense of the local workforce. The “targets” have not been selected because of their race, colour or religion.

Most immigrants (especially in the UK) seem to receive preferential treatment as soon as they arrive, with the government providing houses and generous financial support from day one. Many locals have often been waiting years for better accommodation and are naturally upset when they see a new arrival jump the queue. 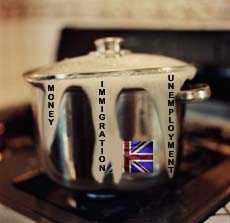 It seems strange that many companies in the past have tried to provide employment for the local workforce, when opening a new factory for example, but our governments ignore this very fair formula when it comes to immigrants.

There are times when a country requires help from foreign workers, and we have seen this happen in many countries like Britain, Australia, America, Canada and others. But when a country is experiencing financial difficulties and high unemployment, it makes sense to review this situation.

I personally believe that companies should always attempt to offer work to those living in the country where they are located (starting with local candidates), based on a person’s ability (regardless of their differences). If this is not possible, then (and only then) they should be allowed to consider inviting foreign workers.

Those looking to live in another country should only be considered if they have a job waiting for them (a position that can not be filled by a person with equal ability locally). Alternatively (if they have no job), they should bring sufficient funds with them, so as not to require financial assistance from the government. This is a system adopted by many countries and seems a reasonable condition to apply.

People often ask why immigrants and asylum seekers don’t choose a country nearer to their place of origin, which might be more suitable from a climatic and cultural point of view. The answer of course is very simple, these countries do not provide the same level of support that you would find in Britain or America (for example) or have people to help them with their claims (including translators!).

Naturally, having such a generous system is going to attract people looking to abuse this generosity, and despite what the authorities say, thousands (if not millions) do exactly that.

Few would object to assisting genuine cases of people in need, but how many really fall into that category?

Many of the immigrants that are accepted into Britain do not speak English, are often too old (or young) to work and frequently lack any special skills. Yet because of laws introduced to protect minorities, companies are forced to employ a percentage of these people, regardless of whether they are suitable or not.

I am sure that the original laws were more than adequate for protecting employees from discrimination, and companies should not be forced to make decisions that could affect their profits. A company’s main goal is to be profitable, and most will employ people that can help them achieve this. It would be bad for business to ignore a talented candidate because of that person’s race, colour or religion.

Although laws protecting minorities were probably created with the best of intentions, they have now become a double edged sword. Some (but certainly not all) use these laws very effectively to gain personal advantages and provide some immunization against penalties that the majority face.

Discrimination is not an exclusive problem for ethnic minorities, it can affect almost anyone. No law can possibly protect a person from an interviewer who refuses to employ someone because they are too old, have a bad haircut or spotty face, or maybe an accent they don’t like. They can always provide a million other reasons why they didn’t give you the job.

Everyone (but especially immigrants) must accept the fact that taking advantage of a country’s benefit system, is going to create bad feeling amongst those who do not abuse it. This is no excuse to resort to violent protests, but the authorities must realise that there is a limit to what some people will take.

It is the taxpayer’s who have to pay for the government’s generous attitude towards immigrants, whilst having to watch public spending cuts that affect hospitals, schools and other important facilities.

Overloading a country with immigrants when it has a high unemployment level and can barely support the existing population, is a recipe for disaster. Not only does it affect the native inhabitants, but the immigrants who are already settled in the country.

Hopefully, the government will restrict future immigration to people who possess skills that are not currently available, or insist that a person has sufficient funds to invest in the country (perhaps creating a business that will provide employment?). It is also hoped that the immigrants who are already established in the country will help support such an idea, as this will reduce the risk of racial tensions escalating.

The British have adapted very well to the cultural changes seen over the last 50 years and people seem to get along without too many problems. It would be foolish to ignore the dangers of overloading the system and putting that success in jeopardy.

Trump Policies to Affect Indian and Chinese Immigrants, but Not the Way People Think