When a group of med students make plans to spend their Easter break together in a mountaintop cabin far removed from civilization, they never expect to find themselves in a fight for their lives against an army of ghouls dressed in Nazi uniforms. After arriving at the isolated ski lodge, they learn that they don’t have any cell phone reception, and only then does it occur to them that their predicament sounds a lot like the typical plot of high attrition-rate horror fare.

They start joking about Friday the 13th, Evil Dead, April Fool’s Day and other scary movies they’re reminded of, knowing full well that they’re in Norway, not some rural American setting normally associated with such grisly goings-on. But that is precisely what ensues in Dead Snow, a low-budget splatter flick which tends to follow the genre’s conventions, except that the black guy doesn’t die first because there aren’t any brothers for miles around this lily-white enclave. 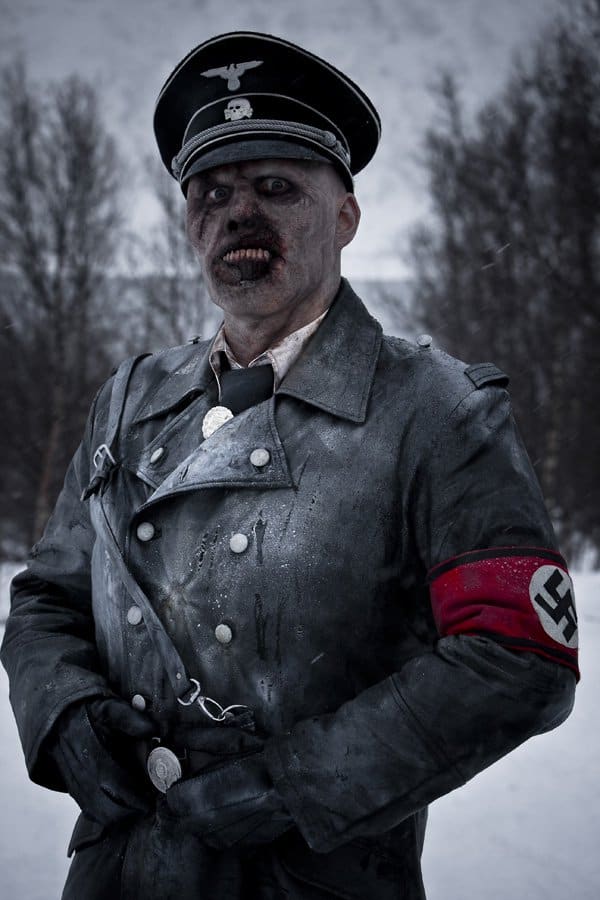 We don’t meet her until later, because she chose to travel by skis through the snow instead of by car like the rest of the revelers. The three other females are nondescript damsels-in-distress: Chris (Jenny Skavlan) who secretly has the hots for Erland, her cousin, Hanna (Charlotte Frogner), and Liv (Evy Kasseth Rosten).

While relaxing with beer while playing a game of Twister, the party is interrupted by a grizzled geezer (Bjorn Sundquist) who warns that these very same hills are said to be cursed ever since it was the site of a slaughter during the Second World War. Needless to say, the newcomers ignore the local lore at their peril which soon arrives in the person of the late Colonel Herzog (Orjan Gamst) and his ghoulish henchmen.

Directed by Tommy Wirkola, Dead Snow is a derivative affair with nothing special to offer besides the novel sight of Nazis as zombies. Still, it’s well enough executed to recommend for fright fans, provided you have a strong stomach for gratuitous gore.

Hitler of the dead!

In Norwegian with subtitles.

To see a trailer for Dead Snow,