A documentary called “Crop Circles: The Hidden Truth” produced by Richard D. Hall, has recently appeared on SKY Channel 200 “which uncovers the involvement of MI5 in crop circle making,”

You can watch this documentary by clicking HERE

Richard D. Hall interviews a number of experts in Crop Circle research such as: Robert Hulse and David Cayton, with additional information from Colin Andrews and Roy Dutton.

Colin Andrews has been involved in Crop Circle research for many years and you can check out his website at: http://www.colinandrews.net

The documentary explains some of the differences between manmade circles and those that are considered genuine (quite a small percentage).

The following extract was taken from Richard Hall’s site and is made by the producer of “Crop Circles: The Hidden Truth”: 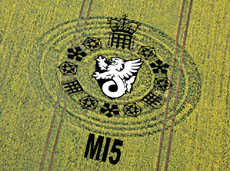 “I am not what you would call a “croppie,” I have no leaning towards the “mystical” or “magical” powers people claim are at work within crop circles. I believe that people use words such as this, simply because they are unable or can’t be bothered to find the true cause behind what they are seeing. They’re not really interested in actually getting to the bottom of what is going on. In this film I have selected the people from the UK, whom I believe to be the most objective researchers in this area. With the intention of finding the truth as far as is humanly possible with the resources I have at my disposal. I have found that the world of crop circles, like many other related areas have what I call an “information war” going on. I believe that much of this information is being spread by intelligence agencies via their “operatives.” These operatives are researchers or journalists whom are broadly accepted by most in the crop circle or UFO community. I now know who several of them are and in the coming months I hope to expose these individuals to the world and end the disgraceful psy-ops programme which MI5 have been pedaling for decades. Incidentally they have been using tax-payers money to bankroll these individuals. Crop Circles – The Hidden Truth will hopefully shock you, but this film is merely the start of things to come.”

Could the documentary be a tool to promote the DVD? Quite possible, but that does not mean the information is unreliable. There are many subjects (not just UFOs and Crop Circles) where psy-ops are used and they can be very effective in making the public think they are conspiracy theories created by cranks.

The 9/11 WTC attack is perhaps one of the most controversial subjects of recent times, where the “evidence” presented to the public has the appearance of being a little too “convenient” to be believable. Unfortunately, much of the information given does not really stand up to scrutiny when examined with a more unbiased eye.

To believe that those accused of being behind the 9/11 attack could possibly achieve this, without substantial “inside” help, is asking us to stretch our imaginations to the absolute limit. There are only a few people who would truly benefit from such an attack, and they are not the one’s who have been blamed for it.

With this thought in mind, it would not be too difficult to believe that the same people could be involved in the cover-up of many other mysteries. However, watch the video yourself and then decide whether there is any truth to the claims made.