Occasionally the players in a movie are so damned impressive, it’s hard to figure out early on that the material they’re working with pretty much pales in comparison. And Crazy Heart, directed by actor turned filmaker Scott Cooper, is more than a case in point of just what sorts of creative skills it takes to prop up that old adage about squeezing lemonade out of lemons.

Which also brings a bit of sage advice about the pitfalls in allowing actors behind the camera, something that rarely works. Because that particular hybrid in charge will naturally be more focused on their own internally nurtured craft, and with dramatic considerations tending to upstage inventive storytelling. But Crazy Heart, adapted from the Thomas Cobb dusted off novel that’s been out of print for 22 years, nevertheless shines, for the sheer pleasure of experiencing Jeff Bridges and Maggie Gyllenhaal doing their otherwise far fetched thing on screen. 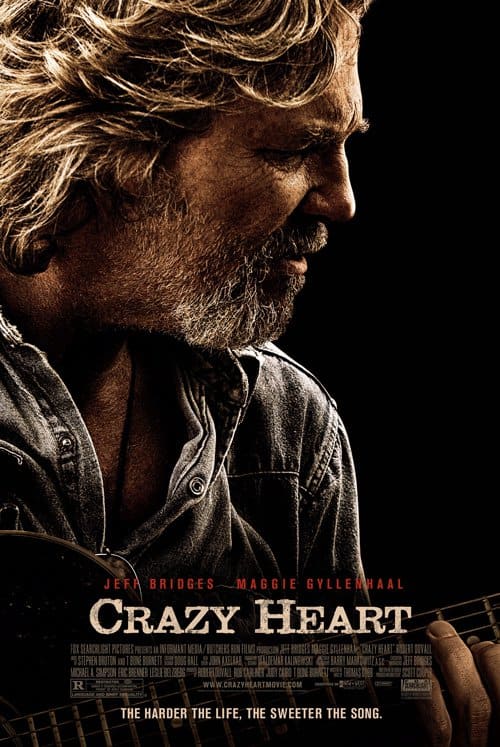 Bridges is Bad Blake in Crazy Heart, a once popular heartland country singer who’s degenerated into a barely functioning grumpy old alcoholic if not yesterday’s news, and now relegated to performing in redneck bars and bowling alleys with kid garage bands, for chump change. Unconcerned about the very real possibility of drinking himself to death, Bad Blake nurses a grudge along with his gin bottles, against a rising star in the country music world (Colin Farrell in a curiously uncredited role), whom he once mentored and has now grabbed what Blake considers his spotlight turf.

Also curiously, neither fans nor panting female groupies seem to be aware of Blake’s perpetually vomit stained, disheveled and deteriorated condition, something which only the audience is oddly supposed to notice and take for granted. And when worshipful small town journalist Jean (Maggie Gyllenhaal) pursues him for an interview and he in turn pursues her for a little incidental romance, she hasn’t a clue either. Even though her ‘what was she thinking’ single working mom character is presented as firmly entrenched with hard core family values, and a primary focus on caring for her vulnerable four year old son.