I don’t know where you stand, dear reader, on the subject of whether or not our world shows deliberate design, but I can tell you something you may not know, because science absolutely refuses to admit it – to the public and to itself: There is positive evidence of design, and not chance, going on out there.

This is not the most popular tack for a writer – even a scientist like myself – to take today. It’s true a steady 40% of the country feels comfortable telling pollsters they don’t believe in the evolution theory science insists upon, which pointedly denies any design in the natural world (and which, ironically, is partly based on the evidence of domestic breeding, which are the designs of man, of course). But when it involves strong argument, the country tends to split right down the middle, so I think only about half of the 40% who really believe in design in the natural world want to see it brought up again here. So I’m probably ticking off 80% of my readers, and I’ll just quote Phoebe Buffet (of *Friends*) and say brightly: “Okay… let’s do it!”

One of the most outstanding indications of a deliberate design actually lies a short way out in space, with our nearest neighbor, the Moon. The Moon is about 240,000 miles from the Earth on average. Its diameter is 2160 miles, and it subtends an angle of 0.527 degrees, on average, as seen from the Earth. That’s about the apparent size of a dime seen from 6 feet away.

The Sun is about 93 million miles away, and about 865,000 miles in diameter. Its average apparent diameter, seen from the Earth, is 0.533 degrees. Compare that to the Moon’s 0.527 degrees. They’re essentially the same, 0.53 degrees across. That’s why a total solar eclipse is possible: The Moon is precisely the right apparent size. Put another way, the Moon is at precisely the right distance from the Earth, on average, to totally eclipse the Sun. 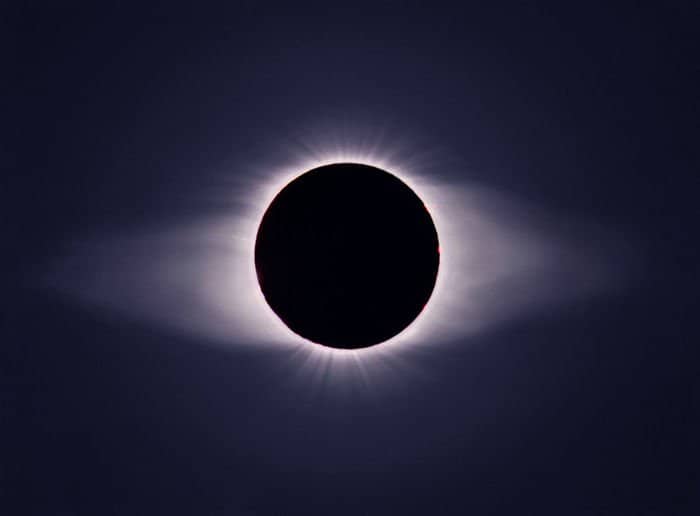 Now, in a solar system littered with moons – 135 of them the last time I checked – our Moon is the only one that is both perfectly round and anywhere near the right size to precisely eclipse the Sun, as seen from its mother planet. And it does it precisely, on a precisely repeating cycle, like nothing less than a cleverly-designed clockwork. Most scientists brush off the Moon, and its clockwork, as a “cosmic coincidence.” Ancient man was properly and reasonably awed by it. As a competent mathematical scientist, I am awed by it.

The Moon, the experts say with the absolute confidence of exacting research and extensive calculations, was blasted out of the Earth itself, very early in the history of Earth’s development. The Moon is still receding from the Earth, very slowly, they say. So it wasn’t always at just the right distance to totally eclipse the Sun, as it is now. This makes it even more astounding that, just by chance, after nearly 4.5 billion years of slow recession from the Earth, it should be at just the right distance from the Earth, throughout the recorded history of man (the last 6,000 years or so), to so precisely match the Sun in the sky, and figure so prominently in ancient man’s religiously-held beliefs.

Furthermore, the Moon goes through phases, from new to full and back again, every month. (That’s why we call it a “month”; it’s a “moonth” – “moon’s” – period, get it? Well, I bet 20% of you do.) These phases mimic the progression of a total eclipse, and underscore the total eclipse as the single recognizable theme of the Moon’s design. Because that’s what this “cosmic coincidence” obviously is, a deliberate design, made with deliberate intent: To emphasize, and memorialize, the total eclipse – as a once-upon-a-time catastrophic extinguishing of the Sun’s light by another body, perhaps. When the Sun “died,” as the world’s myths in fact claimed. That’s why the eclipse was universally feared, up to modern times. (In the Norse myths, at Ragnarok the Sun was overtaken and eaten by a “wolf”; in the Greek, the Sun’s chariot was driven out of its accustomed path by Phaethon, the Sun god’s son, who was hurled down to destruction – and in both accounts, the surface of the Earth was largely burned up.)

Ancient man knew something of this memorial, as a “sacred truth” never to be forgotten. He made calendars of the year according to the Moon’s motion through the sky – though that motion does not harmonize well with the true length of the year – and some are still in use (the Jewish and Muslim calendars, for example). Is that creepy, or what?