A possible cross between Prozac Nation and Strange Case Of Dr. Jekyll And Mr Hyde in this pill junkie age of pharmaceuticals, the Danish psychological thriller Fear Me Not (Den Du Frygter) adheres to the spare framework of the no-frills Dogma conventions. Which essentially means a muted tone conversely steeped in weighty meditative contemplations.

Directed by Kristian Levring and written by Levring and Anders Thomas Jensen, Fear Me Not poses a provocative question with the potential at its core, of among the most frightening premises of a horror movie. That is, what if the suppressed impulses that define human civilization, like murdering all the people you dislike or raping on the spot every woman you find attractive, were to suddenly be uncontrollably unleashed from the shackled recesses of our fantasy worlds? 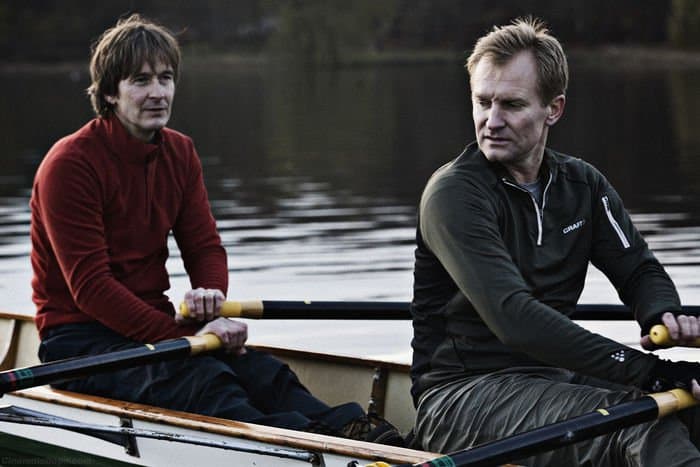 Ulrich Thomsen is Mikael, a wealthy alpha male family man succumbing to midlife crisis burnout and dropping out indefinitely from the Danish rat race. When his brother-in-law, a medical researcher, informs him of his latest clinical study involving an experimental anti-depressant, Mikael pressures to allow him to participate.

As he takes his daily meds over the course of weeks, the normally subdued Mikael discovers in himself a satisfying new serenity, energy and aggressive tendency he had never experienced before. And when the drug experiment is cancelled due to an unanticipated increase in violent behavior on the part of the human subjects participating, a psychologically hooked Mikael lies that he’s discarded his remaining supply of meds, and continues to secretly swallow his stash daily. And Mikael’s behavior takes ever darker turns, as he’s increasingly thrilled to act impulsively on his most depraved inner impulses and fantasies. Including mentally and physically terrorizing his wife Selma (Emma Sehested Hoeg) in order to psychologically control her, sexually abusing a teenage hitchhiker, and forcing his brother-in-law’s wife to succumb to his advances.

Rendered all the more terrifying by its veiled, muted pace, which in its own way is quite more effective than the bloody ostentatious hysterics of conventional horror fare, Fear Me Not essentially imagines a world where human beings are turned on by suddenly no longer having any control over acting out their darkest angers and desires everywhere, while being able to guiltlessly lay all the blame on their medication. Imagine that.

Fear Me Not is part of IFC’s Festival Direct On Demand, being presented nationwide beginning June 10th.