NewsBlaze News
Home Issues Astronomy Solar activity and Global Warming – Is the climate or the science...

According to fairly reliable records, our planet usually experiences a cooling during decreased solar activity, and the less activity there is, the cooler it becomes.

Whilst there is much debate on temperatures over the last few years, many believe that temperatures have in fact fallen (not risen), and this coincides with a solar minimum that saw an extremely low level of solar activity.

However, Joanna Haigh, an atmospheric physicist at Imperial College London, and her colleagues have been studying measurements of the spectral composition of sunlight made between 2004 and 2007, and found that the amount of visible light reaching Earth increased as the Sun’s activity declined, which they believe warmed the Earth’s surface. 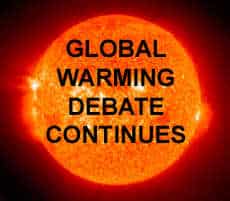 This of course goes against current scientific evidence and you have to wonder (again) who is right, and who is wrong.

It is perhaps no surprise that the public are confused about the subject of Global Warming, when scientists cannot seem to make up their minds on what causes it, or whether it really exists at all.

There seems to be no doubt that temperatures were rising at one point, but we only have to look at the weather reports to see that this has not been the case in recent years. This fact has not been helped because of a media bias in reporting areas that have experienced hotter than normal temperatures. However, there have been many places on our planet that have seen record low temperatures as well.

Clearly, climatic changes are evident, but these are affecting different countries in different ways, and cannot be taken as an overall picture of the Earth’s climate.

Despite the “scientific” evidence presented to support Global Warming, much of the blame is still placed on man-made pollution. Like many others, I find it very hard to believe that this could be the major cause of climate change, especially as this version provides profit making opportunities for the government and close friends. It is for this reason that I am suspicious of scientists that follow this line of thought as well.

Even though our Sun is an obvious candidate when exploring the cause of Global Warming, it is surprising how many scientists are reluctant to include its contribution in their calculations.

I also find it annoying that when researchers do find the courageous to expand their search beyond man-made possibilities, they seem unable to look further than the Sun, ignoring the potential effects a galactic event may have on our planet.

I have mentioned many times the fact that our Sun and Solar System orbit our galaxy once every 200-250 million years (mentioned in one of my books), and if you check the temperatures of our planet the last time this happened, you may also speculate, as I do, that there may be a connection. Is it possible that our planet passes through an area of the galaxy that causes higher temperatures? And would this explain the increased temperatures seen on other planets in our system? If temperatures on Earth are still rising (as some suggest), is this area not worth exploring further, even if our normal instrumentation cannot detect any dangers?

Other areas mentioned in connection with Global Warming have been Chemtrails and HAARP. I have discussed these in previous articles, but a more detailed explanation can be found in the book “The Unexplained Explored”