Are the climatic changes a sign of troubles ahead?

The title of this article may seem a little dramatic, but you have to admit, we are seeing some unusual changes just lately.

Global Warming has been a “hot” subject for some years now, yet many have rightly pointed out that some parts of the planet have seen unusually cold weather. Britain has just experienced its heaviest snow fall in 18 years, an event that has only been seen twice in almost 50 years.

Russia, where this sort of weather is more expected, has experienced relatively mild winters in the last 15 years or so. Yet in South-Eastern parts of Australia, they are witnessing some of the hottest temperatures in 100 years!

So, are we seeing Global Warming, or Global Cooling? Or is something else happening?

There has been a lot of talk about the recent lack of solar activity (no sunspots) and according to some records, this often happens when the Earth goes through a cooler period. 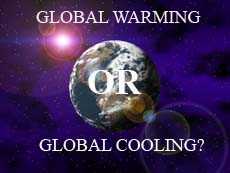 Others have mentioned the possibility of a magnetic pole shift, where the poles change so that North becomes South and South becomes North. The last time this happened was around 790,000 years ago. However, there seems to be no pattern to this event, which has apparently occurred 400 times in the last 330 million years, but it would seem that such a change is overdue.

Many believe the shift has already begun, but historic records have shown that this can take at least 1,000 years to complete (sometimes much longer). The last four shifts took around 7,000 years each.

According to an article in the National Geographic News, the North magnetic pole is moving at a rate of 25 miles a year. “Over the past century the pole has moved 685 miles (1,100 kilometers) from Arctic Canada toward Siberia,” says Joe Stoner, a paleomagnetist at Oregon State University.

Whilst the North magnetic pole does move around by as much as 50 miles in a day, reports clearly indicate that a much more significant magnetic change is taking place.

Quite recently it was announced that the heliosphere, the protective shield of energy that surrounds our solar system, has weakened by 25 per cent over the past decade. The heliosphere is created by the solar wind, a combination of electrically charged particles and magnetic fields that emanate at more than a million miles an hour from the Sun and meet the intergalactic gas that fills the gaps in space between solar systems.

Scientists are unsure why this protective shield (the heliosphere) has shrunk so much and so quickly, but it is certainly a serious problem for our planet if it continues to shrink at its current rate.

It is my belief that our solar system is passing through an area of our galaxy that is harmful to our planet and all the other planets in the system (including our Sun). It takes approximately 250 million years for our solar system to orbit the galaxy, and if you check the historic records to see what happened the last time we passed this area, you will see some similarities emerging.

Modern day pollution did not exist just before the dinosaurs appeared and that was clearly not the reason for the “Great Dying” and increased temperatures, and it is extremely unlikely that is the reason now.

The changes we are seeing on our planet and in the solar system are the result of something massive, to blame this on pollution would be like saying one lit cigarette can increase the planets temperature by 2 degrees (impossible!).

However, thanks to people like Al Gore, we have all been panicked into thinking man is the cause of our climatic changes, and as a result we have to live with carbon trading, and silly energy saving bulbs that make candles seem bright!

Will the magnetic poles shift? Yes (eventually). Will a climatic change cause a mass extinction on our planet? Yes (It often does). Could we see a super volcano erupt, or a large asteroid hit the Earth? That’s a guarantee! (We just don’t know when). Is it possible we will kill ourselves in some nuclear war? Very likely!

Maybe the title wasn’t so dramatic after all? THE END IS NIGH!