In an attempt to discover whether water exists on the Moon, NASA will be smashing two probes onto the surface this Friday.

The first probe, weighing more than 2 tonnes and travelling at a speed of around 5,600mph, will hit the surface first, followed by a smaller craft a few minutes later.

The impact is expected to produce a huge cloud of dust that may travel as high as 10km above the surface. For a short time this dust cloud may be visible to astronomers, but only in certain areas on our planet.

Scientists will examine the contents of the cloud to determine whether or not water is present on the Moon.

If water should be found on the Moon, it opens up the possibility of building self sufficient bases there and launching missions into space more cheaply than at present (because of the lower gravity). 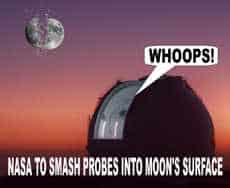 It would certainly make a manned trip to Mars more likely, although designing a craft to withstand the radiation that is found in space, is still a major problem.

Some people have shown concern about the dangers of hitting the Moon in this way, but it is unlikely that such an impact would cause any problems, bearing in mind that the Moon has been hit many times by objects much bigger in its lifetime.

Whilst the Moon may seem an unlikely place to find water, the Indian Chandrayaan satellite detected the potential existence of water a couple of weeks ago.

The Moon has always been an obvious choice for a base, rather than a space station, and even if we do not find water there, there seems an extremely good chance that the dream will become a reality within the next 15 years or so.