I was contacted by Harold Berndt many months ago and we have been discussing UFO’s and Aliens ever since. Harold has very kindly shared some of his experiences with me and I hope that I will get an opportunity of also sharing those with you later.

In one of his emails to me he mentioned dreams that he had experienced when he was very young, which involved what he describes as “Little Skeletons.”

After seeing an article from an author who is writing a book about this, he sent details of his experiences with “Little Skeletons” to George Filer (of Filer Files). The article was published, but credit was given to someone else. Harold wrote to George Filer on numerous occasions to point out the error, but has so far received no response. 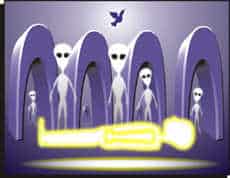 I know for a fact that Harold Berndt provided this information, because he sent me the exact same details months before it was published by George Filer. Naturally, Harold is a little concerned (for various reasons) that someone else should be accredited with HIS experience and has asked me to help rectify this error.

I was of course more than happy to assist and have republished his story below, which I hope you will find interesting.

We would both be keen to hear from other people who have also had dreams or visions of “Little Skeletons” as this will help us to research this subject further.

When I was young (first memory about 4-5 years old)… I remember a continual and very lucid dream where I found myself in the presence of beings. They (to me) were tall, thin and white with deep dark big eyes. I remember simply finding myself in their presence. I would be lying horizontal and I really can’t remember if I was on a table or otherwise… it almost felt like I was floating. But the one incredible aspect of this “dream” was the feeling I always got when I was in their presence… and it was a feeling of complete and total unconditional love… but it was more than that… it was like the “love” was simply “there.” .. in every fiber of the atmosphere… just “there.” .. available for ALL to experience. It was such a wonderful and content feeling that I would get up in the morning and I couldn’t wait for night-time to come again so I could get back there. And I used to go to sleep every night hoping it would happen again. Now… I had no frame of reference to describe these beings or what was happening to me… but I do remember that my Mom and Dad would come in to kiss me goodnight every night… and they both would give me a little tickle and snuggle with their kiss on my cheek… and I always remember feeling such complete love along with that… Now the beings… I had no reference point to describe them at that age other than early exposure to Halloween images and otherwise and I used to call them Skeletons (which you would think would be scary)… but it wasn’t to me and it was the only way I could describe them… So… in the morning I would be at the breakfast table or wherever and I would say to my Mom (and Dad) that I was with the “Skeletons who tickled me” again last night.

Now my parents (bless their hearts) had no idea what I was talking about and never really gave it much more thought than a child who was either making this up, having a simple recurring dream or imagining this, and it never went anywhere… this went on into the beginning of puberty and years later, after I became so involved in my research and before my Mom passed away (my Dad passed in 1992)… I brought this up with her… and she remembered this… and we talked about how there may have been more to this than a simple dream or make believe.

And then, on one of my field expeditions with Steve (Greer) at Mt. Shasta… our research team were sharing stories… and I finally got up the nerve to talk about this… and as I related my story… the moment I said I used to refer to these beings as Skeletons… Dr. Greer just about fell out of his seat… he interrupted me and announced that in all his writings… and all his talks… he has never admitted this… but in fact he used to refer to the beings he had contact with as a child… as Skeletons also… You could have heard a pin drop… it was quite an event for both of us. I later contacted Linda Wilts (CSETI Assistant) who recorded every minute of every outing we had… and I asked her for a copy of the tape so I could play it for my Mom… After weeks of her looking… she finally contacted me and told that that she found the tape… BUT… that part of the evening (when Steve and I were talking about this) was nothing more than static… 15-20 minutes of static (just like in the movie Contact)! None the less… it happened and something I will never forget (there were 40+/- people there). One other interesting aspect to this which I just remembered… is my older Son (Bryan) came alone with me on this trip… and he came out to every night in the field… EXCEPT that night… he was too tired and couldn’t keep up with our pace!

Don’t forget to check out other UFO and Alien stories on Newsblaze by CLICKING HERE.