On May 7th, Borders announced that it is now taking pre-orders for the Kobo eReader and next month will release its eBook store and apps powered by Kobo. Borders will sell the Kobo eReader along with a variety of other eReading devices in Borders stores in special digital shops called Area-e, launching in August.

The Kobo eReader has been named “the real Kindle killer” by “Wired Magazine” because of its attractive features and low price at $149.99. The Kobo will come preloaded with 100 classic books. The Kobo eReader will arrive at customers’ homes beginning June 17, just in time for Father’s Day. (Smart move!)

Something that makes this attractive is that Borders eBook store will have over a million titles and will include 100 free preloaded titles on the device. Like the Kindle, the Kobo will have a free app available for the iPhone, Blackberry, Android, Mac, and PC. 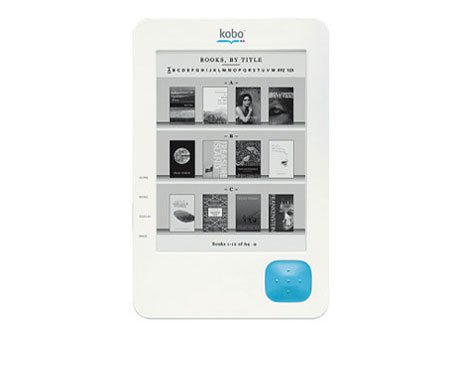 “We’re excited to offer the Kobo eReader to our customers, the first of what will be a wide selection of eReaders we’ll sell, along with an online store that supports a variety of devices, giving consumers freedom in the eBook world at the best possible value. We are giving consumers the flexibility to read the content they want on a variety of devices of their choosing. The Borders eBook store will be positioned as a device-agnostic, content-focused destination with expertise from decades of deep book knowledge and experience. We’ll also have a strong in-store digital presence through our Area-e boutiques, which will launch in August. It’s a niche position within our industry and one where we fully intend to leverage our knowledge and products to serve the growing eReading needs of our customers.”

Here are some specs on the Kobo:

For someone just getting into eBooks and doesn’t have a reader, this would be a good starter. But if you already have a Nook or Kindle, noone will want to buy another eReader that you can’t access the eBooks you have already purchased from another eBook store. At least with the iPad, you can access all the eBooks you have purchased through the Apple eBook store, Kindle bookstore, and Borders eBook store. Barnes & Noble has teased about an iPad app as well.

$149 isn’t a bad price considering the Kindle and Nook are $259. I really think if they would have set the price at $99, they would sell a lot more of these units. Also having the Kobo available right in time for Father’s Day is a good strategy. For someone that wants to get Dad an eBook reader but doesn’t have a lot of money might consider this device also. 100 free titles already preloaded will make this an attractive purchase also.

Google has announced their eBook store coming this summer. You can find that article here.

We have a handful of companies in the eReader business now, with no definitive leader in the industry as of yet. I think pricing, features, presentation, advertising, and available titles are the qualities that these companies will focus on to become the leader in this technology.