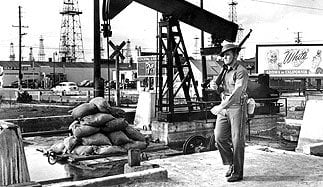 Judy Muller recently completed work on the “California At War” documentary, a one-hour TV special. The documentary brings to light a lot of things most people didn’t know about California and the few years that radically changed the shape of the state. The show airs on Thursday September 20, 2007 on PBS.

Alan Gray asked Judy about her role in bringing out the great story of how the war changed California and how California contributed to the war and to the world.

AG: How did you become involved in the “California at War” special

JM: I had worked with California Connected last year, after I left ABC news and I think they do wonderful work. They called and asked if I’d be interested in anchoring and recording an hour-long historical documentary. I know the producers that work with California Connected are all absolute pros who come from network television and I thought this is the best of all worlds. An hour of commercial-free television that we shape ourselves.

AG: Did you have any interaction with Ken Burns or his crew?

JM: Ken Burns’ project is separate and he has his own producers that work with him all the time. So this is an adjunct to his project. We thought that California played such an important role in World War II and there was so much material for a completely separate one hour documentary. Because of the Ken Burns series, people were interested already, we thought it was a great time to do it.

When Ken Burns was out here, I co-hosted an event with him and we looked at various clips from his series and took questions from several people about the series and it was a good chance to mentions ours at the same time.

AG: I just wondered if they gave you material or you passed material to them

AG: How many people did you interview for the special

JM: There were a lot, we had many prominent historians including Kevin Starr, who is the best of all California histoians in my opinion. All of these people who played a role – between the women who went to work in the factories and the Japanese who were interned. It was really exciting to talk to people who lived the history and as you know, if you waited too much longer, a lot of these people wouldn’t be around. This was exactly the time to do it.

AG: How were so many interviews handled?

JM: As there were so many, different produceers handled three of four. They were so spread out, one person couldn’t possibly have done all of this work in the amount of time we were given. This was a real team effort.

Then we would transcribe all the interviews and create a notebook of all the notes and material and decided what we liked best and what we wanted included. Then everyone had a chapter to write. I wrote the prologue and the epilogue and also rewrote some of the body. Television documentary is really a team effort.

AG: How long did you work on the project?

JM: It was several months. That isn’t very long for a one-hour documentary. Its about the shortest time you can do it in. Everybody worked incredibly hard and it was really quite incredible that we did it that fast – it was an amazing team effort. Some parts were rearranged or rewritten to make it flow and we were doing that right up to the last day of editing.

AG: What were the most interesting things you learned that you didn’t know before.

JM: My father was a US Navy officer in the Pacific and I thought I knew a lot about WW II because I was a military brat. And yet, I never knew that the Japanese were sinking ships, right off the California coast and firing on oil fields, right on mainland USA. I think a lot of people are going to be surprised about a lot of the details in our history. These are all elements that we should know about. People will also be interested to learn what California was like before the war. California was predominantly white, it was fairly homogenized, nothing like we see today.

AG: How do you get such interesting information from the people you interview?

JM: When you ask people to tell their story and they’ve got a great story to tell, it isn’t that hard to get information from them. These are people who lived through such a formative time in our history and they are proud of the part they played. The women who worked in the factories, the men who flew in the raids. They are excited that you want to hear the story. In this kind of interview it’s not difficult to get peopole to talk. What I think is important is that the interviews were long and that allowed people to remember things they might have forgotten. So that is important to really give them the time to come up with the whole story.

AG: What other interesting projects are you working on?

JM: I’m on sabbatical to write a book on small town weekly newspapers in America. One editor said to me I’m writing the great american novel, one chapter at a time. I’ll go to small towns all over the country, to visit them and get their story.

I’m very excited about the project and right now I’ll be in my cabin doing research.

“California At War” is a special not to be missed, so remember to check your local listings for stations and times. The show airs on Thursday September 20, 2007 on PBS.

The Lasting Impact of World War II on California