“The Boom” is a play written by Vinnie Nardiello and directed by Mark Riccadonna that examines the life of a stand-up comic behind the stage. While usually we only see the personnae comics create for audiences, the majority of their lives is in fact spent away from the stage, in the form of travel or forced camaraderie with other comics.

“The Boom” takes place entirely in a dilapidated comedy condo owned by Steel City Funny Factory in Pittsburgh, a place where the club crams comics to save money. Each week, a new group of traveling stand-up comics move into this condo where they live together, drink together and silently hate each other as they prepare for the evening’s shows. The condo is claustrophobic, both literally and mentally and strong egos and glaring age differences collide beneath a facade of friendliness. Theater for the New City’s Dream Up Festival will present the play’s world premiere September 9 to 20, 2015. 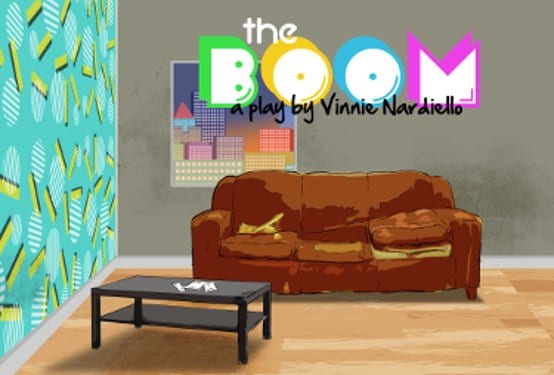 “The Boom” centers on three comics: Buddy Darby, a reformed addict turned religious freak and experienced comic who is past his prime; Tim, his right hand man whose comedy skills are lacking and Ray Messina, the new guy who is making a name for himself by appealing to a younger generation after he had his big break in the form of a viral video.

mmediately there is tension between Ray and Buddy. Buddy was Ray’s comedy idol growing up but now he seems out of place in a quickly evolving world. Ray struggles to adapt his vision of his hero to fit the image of the sad man before him clinging to a career that has already ended. Each knows his role for the weekend, but the club owner has a different idea when he chooses to switch their spots as opener and headliner, giving Ray new confidence and superiority.

While Ray makes Buddy reassess his own career and lack of relevance with audiences, Buddy leads Ray to think about the comedy business and how it changes a person for better or worse.

“The Boom” (www.theboomplay.com) gives audiences insight into the world of comedy as a business, the pressures that come with having to make people laugh every night and the search for approval and self-worth that drives both the comedians and their audiences.

Playwright Vinnie Nardiello’s work has been featured nationally for over a decade. In addition to his own offerings on the stand-up comedy circuit, he has contributed material to other comedians’ corporate and media appearances and has had his work performed at the White House Correspondents’ Dinner. He recently served on the writing team for “Paulie,” a television pilot starring Paul Sorvino and Janeane Garofalo and is developing his own docu-series, “Unconventional,” with Excelsior Entertainment. Nardello’s work is heard on programming as diverse as ESPN, the nationally syndicated Bob and Tom Show, Sirius XM radio and he has appeared on air as a panelist on the Fox Business Channel. “The Boom” is his debut work as a playwright.

Director Mark Riccadonna is a writer, actor and comedian who is making his directorial debut at The Dream Up Festival 2015. After graduating from the American Academy of Dramatic Arts and studying and coaching in several scene study courses over the years, Riccadonna decided he was ready to try directing. He is a cast member of the Ammoralists Theatre Company that is known for traveling with Armed Forces Entertainment to perform stand up comedy for military all over the globe as well as domestically. He won Best Actor in The Comic Strip Film Festival and was part of the cast of “Game Night,” the film that won Best Director at The International Film Festival.

The festival is dedicated to new works. TNC feels this festival is especially needed now in a time of declining donations to the arts, when grants are not being awarded due to market conditions and arts funding is being cut across the country and abroad. The festival aims to push ideas to the forefront through imaginative presentations so as to challenge audience expectations and make us question our understanding of the way art illuminates the world around us.