NewsBlaze News
Home Entertainment Music With a May Reissue of Ram by Paul McCartney, Why Is the...

“Paul has simply proven to be the most vulnerable: the group hid most of his weaknesses longer and better than they did the others so that they were the most unexpected now that they have finally become visible. But now they have become visible and the results can scarcely be more satisfying to McCartney himself than they will be to the many people who will find this record wanting.” Jon Landau – Ram review for Rolling Stone – July 8, 1971

A restored version of Paul McCartney’s second solo album, Ram, will be released in the U.S. on May 22nd. And yet, I have to whine, I badly need to hear it right now! To satiate an unquenchable thirst for these archaic tracks, I went with an available single (on itunes) from Ram, Uncle Albert/Admiral Halsey, which was Paul’s first single as a solo artist to go number one. Moreover, I picked up Another Day (a favorite of mine), as it was released as a single shortly before Ram hit the record racks (May 17, 1971). 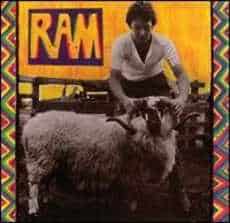 Well, I just noticed you can hear all of the Ram tracks on YouTube. That’s cheating, but I needed to hear these songs immediately! Boy, 41 years ago turns back the clock quite a ways. I can pinpoint the release date to around two weeks before I graduated from high school (Jesuit College Preparatory). I purchased the double jacket sleeve vinyl record at the Melody Shop, which was located in a humble strip mall, at Cox Lane and Forest Lane in Dallas, Texas. Unfortunately, I lost track of the record in 1974, when a junkie (I presume) stole all my classic rock albums from a beat-up, misbegotten flat (a crash pad really!) I lived in at the time (Austin, Texas, during the Cosmic Cowboy period).

A promotional piece I saw on Beatles News gives you the scoop on the complex packaging in the works for Ram, that Paul is laboring furiously over (even as I write this). There’s a nice snippet of film here, called Ramming, that’s part of a little film produced by Paul as a documentary for this reissue. The Deluxe Edition looks like the right way to go (for rich folks), with four CDs, a bonus film DVD, a 112-page book, photo prints, and on and on. There’s also the vinyl edition, a mono vinyl edition, and naturally, the Standard CD Edition. All look splendid to me!

If I can’t manage The Deluxe Edition financially, I’ll be happy enough with the Standard Edition, which has at least been remastered. But there’ll be enough about all this jazz over the next few weeks. What I’m most concerned about today, is how should we look at Ram in the here and now? And how should we interpret those times (specifically, the late spring of 1971), shortly following the breakup of The Beatles, when this whimsical, home-grown project becomes an integral part of our lives? What about the individual songs, such as Too Many People or Monkberry Moon Delight? Do they still hold up?

When looking over Jon Landau’s review from those times, I remember feeling exactly the same way about Paul being too corny and too ‘florid,’ as Jon says. And yet I kept putting the record on my record player and spinning it again. Part of the secret charm of Ram, is the way it was recorded. The theme song has a ukulele, a choir of background vocals, and enough reverb to send you off into a pillowy bunch of cumulus clouds. This is a pot record, and served the millions of pot users well, during a time when they had to come to grips with the reality that they wouldn’t be hearing any new Beatles’ songs anymore.

Ram is a pain killer, neutralizing the intensity of the 1960s, that couldn’t be sustained any longer. The early 1970s were the beginning of very mellow period in music, that would signal the start of Soft Rock, and showcase the obvious popularity of The Carpenters or The Captain & Tennille. Mellow is a word that aptly defines this period, when all that people really wanted was to escape from their troubles. But a nagging question at hand, is why did Ram receive such scathing reviews initially, then gradually through time, gain momentum (snowballing with the underground), then emerge unscathed as one of Paul’s grandest creations ever?

This is not such an easy question to answer. I’d say, it’s because Paul was the first to dip his toes in the lovely waters of mellowness. It just felt right for the times. Why have a cardiac arrest everyday of your life? Paul was the first to say ‘I’m going to just let it all hang out!’ Paul and Linda were simply happy living in the country in Scotland, and Ram expresses this natural glee. ORGANIC or homegrown are perfect words to describe what Ram does to you, or to describe the historical times in question (the early 1970s).

I suspect this is why people (through the years) continue to love and appreciate this record, which gives off an aura of a homemade gift that Paul created for you alone, perhaps as a birthday or anniversary present. And Landau is wrong in some places (correct in others); there are quite a few passages of raucous rock in Ram. But it’s more satirical, or inserted oddly in a misplaced bridge or couplet to a ballad like passage. You have to stay on your toes and guess why and where something fits in where it does.

Noticeably, Uncle Albert is one long medley (or several different songs linked together); a showcase of musical genres that spring forth (possibly) from Paul’s imaginings of his youth. The opening passage reeks of nostalgia and reverie (after some recreational puffing), but vaudeville motifs are its central genre. The ‘hands across the water’ bit, with Linda singing rhapsodically, is pure jubilation! A comic Fooglehorn acts as a bridge to yet more idle hippie ambling, nevertheless very clever. It’s as if a long-lost uncles’ pasty portrait sitting on your auntie’s antique mantle comes back to life.

The argument here, as to the bewildering sustainability of Ram, that continues to grow over the years, is that a great deal of musical sophistication is baked into the tracks, or hidden in caches of layered notes, or snuck in on lyrical lines worthy of much further exploration. Though Paul still won’t admit it, we wonder whether the songs were loaded with allusions to The Beatles breakup, or some subtle put downs inserted, of say John on Too Many People. IE, Paul recognized John was trying too hard to be radical and underground in the early part of the 1970s. We know this to be true now, so maybe Paul was writing about John & Yoko’s exaggerated radicalism!

And what about Dear Boy? Was this autobiographical on Paul’s part, or was he speaking of his songwriting colleague of so many years and so many Liverpool struggles to succeed? ‘What you have found’ could refer to John’s discovery of Yoko or it could refer to Paul finding Linda. Either way, it makes for an an interesting listen. ‘I hope you never know how much you’re missed,’ must refer to John, I’ve always believed. Lennon stood in a pig stye twisting the ears of a pig in a mock pic of Ram, which kept us all in stitches back in those days. Has John managed to upstage Paul?

When the reissue of Ram comes out in a few weeks we’ll have a lotta grass to chew on (figuratively). Did Paul help to initiate a period in our history when we just couldn’t cope with all the pressing issues ominously surfacing throughout the crusty 1960s? Nobody wanted to work or struggle anymore for nothing. Just wanted to lay around, daydream, and puff on smoke, and mostly listen to Ram. It looks like this is what Paul wanted to do too. ‘What’s wrong with that? I need to know, ‘cuz here I go again!’