It’s a normal working week and weekend for me. I’m walking around town; I’m running and, yes, even jumping. But what I’m mostly doing is driving from place to place, and this time I’m stopping into Sushisamba Strip on the Las Vegas Strip at the Palazzo Shoppes inside the Palazzo Resort on second floor.

When I arrived at Sushi Samba on a Friday night recently, the place was packed for their grand opening. In fact, despite the economic crunch, restaurants are opening all the time in Las Vegas – especially fun spots like this. It’s a blending of Japanese, Brazilian and Peruvian cultures. Sushisamba is considered a boutique nightclub. The full name Sushisamba Sugarcane Boutique Nightclub. 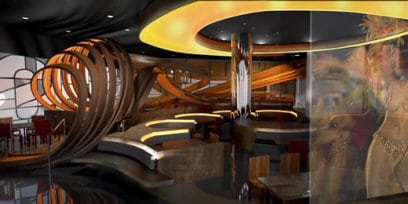 There were more than 40 geishas, samba dancers and Taiko drummers performing in front of a three-story orange waterfall in the Shoppes area – like an international festival! As I entered the contemporary, colorful restaurant, I checked out their menu while watching the parade of Samba girls in their feathered and jeweled costumes; they walked rhythmically through the restaurant to the pulsating beats of techno music with a Latin flavor.

What a combination! Visitors get all that plus good Japanese Sushi and other dishes. I know because I tasted the Berkshire Pork Belly Roman Soup, $18, but it made a meal.

I decided to go visit the club, called Sugarcane, which is located in the back of the Sushisamba. I squeezed past the crowd where I ran into Carrot Top, the comedic stage performer with gadgets and one-liners that keep crowds in an uproar. The Top is in tip-top shape, so I asked him how I could trim my physique. He said, “Keep on walking and work the weights.”

The great evening at Sugarcane was enhanced by the celebrities who joined in the fun. The cast of HBO’s hit “Entourage” was there, along with the epicurean master Robin Leach. (I just love the way he says, “Hello, Peter,” with a lyrical lilt to it).

Sugarcane is the kind of club that has live musicians, plays real music and displays dancers gyrating their hips, all while people make their own choice of moves. So, check out the club, fascinating rhythms, live musicians, plus their great deejay.