Starpower Management announces today that they will be producing the first video for their client Moira Cue’s new single, ‘Make You Happy,’ which will be on her next demo album, to be released later this year. With the song produced by Ralph Rieckermann, formerly of The Scorpions, who also plays bass on the single, the stripped down acoustic ballad will lend itself well to a cinematic interpretation by the artist Moira Cue- manager Bruce Edwin states. Singer Moira Cue wrote the song concerning a significant event that affected her life, and the song was an artistic rendering of that moment. Music Journalist and Music Manager Bruce Edwin compares it to ‘a female version of Morrissey from The Smiths, with a bleak, tragic story, yet an undertone of hope with a melody of memorable, melancholic pop appeal.’ The video is directed by renowned cinematographer Bill Boatman, has already been shot, and is now in post production. 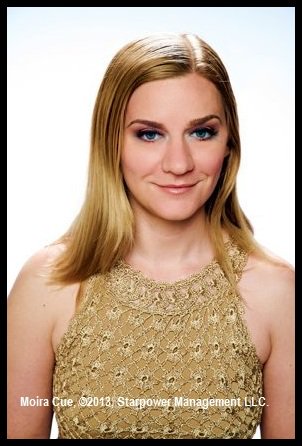 Hailing from the School of the Art Institute of Chicago’s Master’s Program, Multi-Media artist Moira is a busy woman. When she’s not working in the corporate world designing influential, national multi-media graphic art and copy writing campaigns for high powered players in the world of business, she’s either on stage singing, on screen as an actor, writing, painting (one of her works is in the private collection of Madonna), running marathon’s, hiking for countless miles, helping strangers at nearly every turn, or as of more recently- rescuing and nurturing an abandoned Siberian Husky back to health and finding it a loving home.

Truly a renaissance woman, Moira Cue is an artist like no other. Former Michael Jackson guitarist David Williams stated of Moira, ‘She’s it man, she’s dynamite! I have worked with the biggest stars in the world, and she has got it, she has the charisma, she’s on fire!’ Manager Bruce Edwin states of his client, ‘She has more energy than any person I have ever met- It’s unbelievable. And she is just a phenomenal songwriter and painter- she has so many talents, its amazing, it really is quite mind blowing. For one person to have one of her talents would be incredible, but she has so many, it is quite mind blowing to me.”

The T.V. show America’s Got Talent stated of Moira Cue’s song ‘California,’ that “We can’t get it out of our head! We were all singing it in the office all day! It’s very catchy!’ Clive Davis’ office of then J Records / Arista (who discovered Whitney Houston) stated, “We love Moira’s song California! It’s a great song.” Celebrity publicist Michael Levine, who represented Michael Jackson, Cameron Diaz, and many more, who saw Moira perform at the Starpower Management VIP Party in 2011, stated, “She’s really good. She has really got talent. She has got a lot of potential.” Of her song ‘Make You Happy,’ Michael Levine stated, ‘That’s a really good song, it brought tears to my eyes. I love the song.”

One of China’s biggest selling fine artists called her ‘The best art writer he had ever read,’ hailing her art criticism as ‘ enlightened and genius.’

Moira Cue has performed on stage at venues including The Viper Room, The Knitting Factory, The Mint, and many more. She made her latest mark in the art world with the debut her series of black and white paintings at the cutting edge ‘Select Art Fair’ in Miami, Florida in December 5th, 2012 for Art Basel week.

Moira appears in the feature film due out this year, ‘The Visitor from Planet Omicron,’ a campy science fiction comedy. The film stars T.V. and screen legend Sally Kirkland. Moira Cue is represented by Starpower Management in all areas.

Bill Boatman has been involved in the motion picture industry for over 25 years. He has contributed creatively to more than 30 features, hundreds of music videos, commercials, documentaries and more.

Beginning his career at the young age of 18, Bill Boatman has worked in Hollywood as a writer, editor, lighting director, assistant cameraman, camera operator, director of photography, and director.

After following the trail of employment on a multitude of independent features that happened in the nineteen-eighties, Bill Boatman oscillated back and forth within the music video world with artists including Mariah Carey, Rod Stewart, Bon Jovi, Don Henley, The Rolling, Stones, Prince, Michael Jackson, Janet Jackson, Snoop Dog, and many more.

In 1994, Bill Boatman returned as Camera Operator for five seasons of the drama hit series NYPD Blue. It was there that he was able to gain and absorb the wisdom and knowledge of his mentors- screenwriter David Milch and Steven Bochco before being summoned back to music video world with the personal request from Mariah Carey to be her personal visual consultant. Mariah Carey enlisted Bill into the position as her personal Director of Photography, Still Photographer, Lighting Director, Cameraman, and Music Video Director, where he currently tours with Mariah Carey around the world for their work on the T.V. show American Idol. Bill Boatman is represented by Starpower Management LLC and is pleased to collaborate on shooting the debut music video for singer and songwriter Moira Cue.

Ranked among the top 2 and 1/2 percent most powerful and influential management firms in the world, Starpower Management LLC is based in Santa Monica, California, and is headed by CEO and talent manager Bruce Edwin. The firm has open door policies directly with numerous billionaires, superstars, world famous music and film studios, and more. It is comprised of its model, talent, and music management division, production arm, publishing division, and fine art division. It is further now developing a celebrity division that will include elite services for the rich and famous not found under one roof with any other agency or management firm. Starpower Management represents numerous stars and feature films for production that the firm keeps confidential. Stars it publicly represents include actor and comic star Jim Meskimen, celebrity publicist Michael Levine, model and actor Lee Burns, and actor Mel Novak among more.

The firm also own Hollywood Sentinel Public Relations whereby it provides elite, A-list public relation services to top stars and companies in unique and powerful methods not conducted by any other firm. Stars and companies the firm represents as manager of public relations include actor Jim Meskimen, sculptor Victor Issa, Hilligoss Galleries, and logo designer to the stars- Michael Manoogian among more. The public relations firm has received commendations from some of the biggest stars in Hollywood in addition to numerous billionaires.

For booking of Moira Cue or Bill Boatman, contact Starpower Management at 310-226-7176.

For press or media requests or interviews with Moira Cue or Bill Boatman, contact the publicity department at 310-226-7176