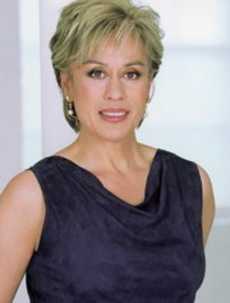 The Mondavi Center for the Performing Arts Gala opening of the sixth season presented glamorous soprano, Dame Kiri Te Kanawa on her “Farewell Tour” in Jackson Hall, at Davis, California.

It was Friday October 5th and the crowd was eclectic – jeans and sneakers to suits and ties, most of us over 40 to 90, with just a few younger faces including the six year-old young man sitting quietly next to me. That is the beauty of the Mondavi Center.

The evening started before the performance with the 3rd annual “Taste of the Season” – a strolling dinner and silent auction celebrating excellence in arts education at the Mondavi Center.

The evening performance began with Mondavi Center executive director Don Roth welcoming us to the opening night. He told us this was the Center’s sixth season, with 50,000 tickets sold so far and that Dame Kiri is sponsored by Raley’s and Bel Air, and Barbara K. Jackson – and we thank them for doing so – the first of 90 performances this season. We were also reminded to turn off mobile phones, pagers and other noisemakers and thankfully, there were no such interruptions.

Dame Kiri’s performance is stunning, and we have to agree with the San Francisco Chronicle that she dazzles audiences with “her luscious, creamy vocal tone, as well as the air of serene nobility.”

On to the performance, it is why we came there. The performance began with Dame Kiri entering with conductor and pianist Julian Reynolds, she in a beautiful shimmering blue gown and he in a smart black tuxedo.

The music was arranged in sets by language, first German, then French, then English and finally, Italian. Always with perfect and clear diction, we were treated to Mozart, then Strauss. Duparc, followed that set with an obvious change in operatic style, moving from German to the highly romantic French.

After the intermission, “Voyage a Paris,” “Hotel” and “Les chemins de l’amour” by Poulenc. Then a change into English, commencing with Jake Heggie’s amusing “Final Monologue from Master Class,” followed by Benjamin Britten’s “Evening” and A Copeland’s “Why do they shut me out of Heaven.”

As a bonus, Dame Kiri informed us that Jake Heggie was in the audience – we saw him as we passed in the aisle – and she hoped he liked the changes made to his monologue.

In the final set, Dame Kiri brought us wonderful Italian Opera from E. Wolf-Ferrari and Puccini – with a surprising duet in the final words of Puccini’s “Sole e amore,” Reynolds reluctantly joining in.

Then came the standing ovations and the encores – we think there were six – and extra songs, which, of course, is what we wanted.

Dame Kiri told us hello and goodbye at the same time, her first and probably last performance at Mondavi. She isn’t finished singing, just touring so many places, and she told us she would concentrate on her foundation and performing in New Zealand. The aim of the foundation is to assist outstanding New Zealand musicians and singers to develop international careers at the highest level.

Once again, we thank The Mondavi Center for the Performing Arts for presenting so many top class performances for our enjoyment.

As if all of that wasn’t enough, we were lucky enough to have front row seats, exactly in the center, so close that Sally remarked on the beauty of Dame Kiri’s perfume and the cut of her gown. Definitely an evening to remember. 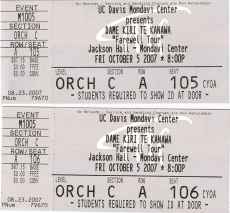