Aspiring Rapper Runs to Puerto Rico in Against the Odds Saga

After Rob (Omarion) has run-ins with both the law and some hoodlums in his Harlem neighborhood, his mother (Kellita Smith) decides it’s high time that her son try a change of scenery. So, she ships the troubled teenager off to Puerto Rico to live with the long-lost dad (Giancarlo Esposito) the boy always considered as good as dead.

Although he doesn’t speak Spanish, Rob doesn’t have much of a problem adjusting to life on the enchanting island, primarily because, as an aspiring rapper, he’s well-versed in the universal language of music. Furthermore, he shares this interest with his step-brother, Javi (Victor Rasuk), a cool dude in a loose mood who introduces him to Reggaeton, a catchy blend of reggae, hip-hop and meringue.

The instantly-inseparable semi-siblings start dividing their time between the recording studio and a popular haunt filled with couples grinding shamelessly and gyrating with abandon to the sensuous beat. While soaking in the new sound, Rob saunters over to meet C.C. (Zulay Henao), the prettiest girl in the nightclub. Wouldn’t you know she’s already primed to dump her abusive, possessive boyfriend in favor of love at first sight with the tall, dark stranger? 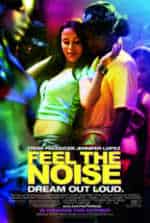 This assorted state of affairs sets in motion the three ring circus called Feel the Noise, a combination flick comprised of equal parts overcoming-the-odds saga, across-the-tracks romance and father-son bonding opportunity drama. Directed by Alejandro Chomski, the movie marks the sophomore offering from Jennifer Lopez’s Nuyorican Productions. Fairly formulaic in most respects, the picture otherwise unfolds innocuously enough to stomach as a Latin version of the ghetto fabulous blaxploits which found their way to theaters in the wake of the explosion of gangsta rap.

Fortunately, R&B crooner Omarion proves himself quite the leading man here, not only generating enviable screen chemistry with his comely co-star, Zulay Henao, but equally-convincing tension opposite Giancarlo Esposito as his filled with overwhelming regret lame excuse for a father. Though its gratuitous street-fighting scenes leave a bit to be desired, the film still remains passable when focusing on Reggaeton or its assorted strained relationships.

Eventually, the setting reverts to the Big Apple where C.C.’s head is momentarily turned by a sleazy record producer (James McCaffrey) promising the stars, while Rob has his hands full with his mom and with bullies intent on settling a score. After tying up all these loose ends satisfactorily, our Prodigal protagonist proceeds to the Puerto Rican Day Parade (featuring file footage cameos by J-Lo and hubby Marc Antony) for a triumphant performance of his new song, which is ostensibly about to take the city by storm.

How do you say “a sappy Horatio Alger tale” in Espanol?