Vincere is a story about Lady Ida Delsar’s relationship with Benito Mussolini, set at the beginning of the 20th Century, told with historic authority and played out against a turbulent, political backdrop. As Ida falls for the charismatic Mussolini, so does Italy, and they become inextricably entwined and victims of fate, hers from unrequited love, Italy’s from Fascism.

Ida meets Mussolini at the beginning of his political career and sells everything she owns so he can start his own newspaper, Il Popola D’Italia. They marry, she claims, but Mussolini, by now a powerful figure and inveterate womanizer, leaves her, remarries and all evidence of this first marriage disappears. It is Ida’s public insistence that she is his legal wife that launches her on her tragic path. 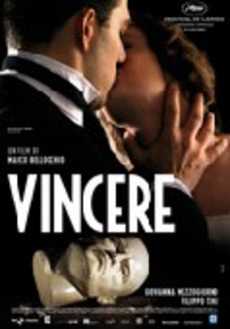 Although Mussolini was a Dictator, he promoted himself as a Socialist, and perhaps it’s associations like this that lead to Socialism being regarded by some with suspicion, despite this creed’s allegiance to its citizens in a crisis, such as an economic meltdown. While a capitalist government might bail out financial institutions with billions of taxpayers’ dollars, a socialist government would merely prop up big business and channel the bulk of the money to the people, ensuring they keep a roof over their head and have enough food to stop them from starving to death. This idea has proved to be quite popular with all the political parties in the UK.

Vincere will educate and entertain and, if you’re female, make you glad you weren’t born a hundred years ago unless, of course, you’ve married British Royalty. In this case, you’ll be crossing your fingers that His Highness doesn’t tire of your charms and replace you with una nuova amante, leaving you alone to dodge the bullets.