True Grit 2010 has the exact same storyline and characters as the original True Grit released in 1969, which was an adaptation of the novel of the same name. The producers are calling it a remake because that sounds like something that’s been recreated, but that’s not the case and True Grit 2010 is in fact nothing more than an uninspired copy of the original. 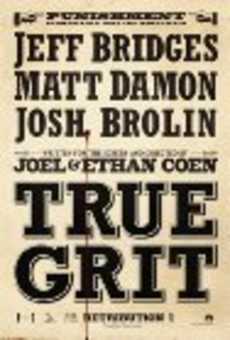 Apart from a little sparkle, another missing component in this film is humor. It tries hard to be witty and smart, but consistently misses the mark and nothing that is said or done takes us by surprise. Rooster is obviously meant to be the source of humor, but his two companions are so po-faced it never really happens and the Wild West’s equivalent of a peeing contest, when Rooster and Le Boeuf shoot at flying corn bread, falls so flat it doesn’t even raise a cringe.

This is Ethan and Joel Coen’s latest film, and Ethan is quoted as saying that “they didn’t think they should mess around with the original.” Really? So what happened to all the “must-stay-true-to- our-vision” gobbledegook they used to bore us with? How does lifting someone else’s work fit into that little mantra? It doesn’t, of course, and, unless the Coen Team are clean out of ideas of their own, I really don’t get why they bothered to produce this. But then again, I’ve never felt inclined to buy a knock off Gucci.