Possibly the only filmmaker on the planet who has garnered recognition through utter infamy, Uwe Boll (BloodRayne, Tunnel Rats) returns to the screen with Postal. His latest fury-inducing fare is primed to tease and test audience limits with yet another of his own video game to screen, delightfully scandalous social satires. The bad boy German import dubbed ‘Raging Boll,’ also has a take-no-prisoners, uncanny feel for the nuttiest, most perverse aspects of US culture, bringing to his unique brand of filmmaking a little of the raw and rowdy flavor of a pro-wrestling ring.

Zach Ward is Dude in Postal, a down-on-his-luck, down in the dumps trailer park guy with a morbidly obese nymphomaniac wife at home doing the male neighbors, while he rambles around town unable to find work. Dude finally turns to his prospect of last resort, his demagogue New Age spiritual cult leader Uncle Dave (Dave Foley).

Uncle Dave recruits Dude for a big bucks heist – along with a scantily clad, occasionally moustachioed gun-toting killer girl posse – of the latest rage in talking dirty toys, The Krotchy Dolls. But a Taliban gang hiding out in the back room of a local grocery store along with Osama bin Laden (Seinfeld’s own Soup Nazi, Larry Thomas) has their own plans for the foul-mouthed dolls, which have all been injected with the avian flu as part of a biological warfare scheme against America. 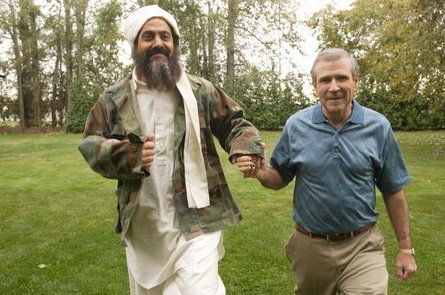 These battling bands of religious extremists engage in skirmishes all over town, including around Little Germany in Paradise, a nazi-themed amusement park run by Ewe Boll himself. Which brings to mind a hunch that nobody else may have wanted to touch that particular assignment in the movie. And along the way to a parking lot showdown, a wacky property damage conspiracy to commit insurance fraud is uncovered between Osama and Bush. The darker, zany recesses of America as viewed from the Twilight Zone. Move over, Borat.