On November 19, 2005, a roadside bomb detonated by Iraqi insurgents exploded under a vehicle killing Lance Corporal Miguel Terrazas, while wounding a couple of his comrades. The IED attack outraged about a dozen of the other Marines from Kilo Company riding in the convoy, and later that same day they allegedly went on a rampage in the vicinity, slaughtering 24 innocent civilians living in the City of Haditha.

Though the incident was originally covered-up, it came to light about four months later only because part of the massacre had been captured on videotape by a student with a camera. As a result, several soldiers were relieved of duty, court-martialed, and shipped back to Camp Pendleton where they are currently facing murder charges.

But was their overreaction warranted, given the stress they were under from the day-to-day rigors of patrolling the streets of a village where they were treated as invading enemies rather than like liberators as promised by Vice President Cheney? And wasn’t their predicament compounded further by the military’s use of stop-loss order as a hidden draft to force soldiers to re-enlist and serve longer tours of duty? Aren’t all things now fair in war, anyway, given America’s recent disavowal of the Geneva Conventions?

These are the fundamental human rights questions posed by Battle for Haditha, a super-realistic docudrama which takes a long look at ethnic cleansing from both the perspective of the cleansed and from the point-of-view of the perpetrators of the crimes against humanity. Shot in Jordan, the film stars numerous veterans of the Iraq War, so it has a feel so authentic, I initially believed I was watching actually footage shot on the front lines of the conflict. 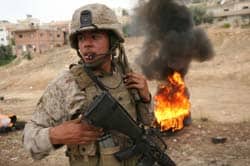 A patriotic reminder to support the troops, regardless of the transgression, since it’s Bush fault that they’re sitting ducks in a godforsaken desert where they’re the only available outlet around for every terrorists’ anti-American impulse. What’s next, a picture suggesting that we have to excuse the Abu Ghraib excuses, too, as reasonable interrogation tactics?

Remember when your mother warned that playing all those gruesome video games would desensitize you to violence? Now witness Exhibit A: Battle for Haditha, showcasing Generation Kill’s all volunteer army in all its glory.

In English and Arabic with subtitles.