This is a story about the liaison between Clinton and Blair, and shows how Blair consistently punched over his weight, rarely inflicting any sustainable damage on Clinton who pats his Brit ally fondly on the head to keep him in line. It’s written and produced by the same people who brought us The Queen and Frost/Nixon and while it does not quite have the appeal of the former it is far more compelling than the latter and is politics at its most entertaining.

Tony Blair became leader of the Labour Party in 1994 but, even before he leads his left wing party to victory in May 1997, he is courted by Clinton. The two affiliate, then run and crash down their tumultuous paths, sticking together right until the end of Clinton’s presidency. 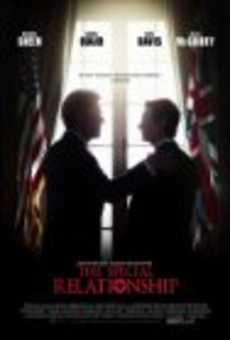 The first test of the Clinton/Blair relationship is the war in Kosova. With Clinton’s support, Milosevic is defeated and, after this first tango, the dancing never stops. With his place on the international stage set, Blair becomes more and more presidential, making many Brits wonder if he’s forgotten which country he’s supposed to be running.

All the characters are well drawn but it is Hope Davis, as Hillary Clinton, who dazzles. She not only bears a spooky resemblance to the real thing but, for the first time ever, gives HC a sense of, well, humanity. If the ex-First Lady had seen this movie before the primaries, she’d have got in the make-over team pronto, got Hope’s soul stitched to her sleeve and poor old Obama would have been dust. So it’s a big thank you to HBO for getting the timing right.

When Bush takes over the presidency from Clinton, it is brilliantly drawn. The air is heavy with a sense of impending doom as Blair bids adieu to the erstwhile president and gushes bonjour to his new best friend, who probably already has plans to make the sycophant Brit his poster boy for the Iraq war. And so the next dance begins, but this time with Bush so clearly in control that it makes the previous match seem reasonably fair, and all Clinton was doing was simply dating down.