Spicing up a traditional Christmas tale with some savvy soul, along with the tough love, big-hearted holiday cheer of Queen Latifah’s perceptive narrative take on things, The Perfect Holiday takes fairly standard sitcomish situations, and wraps them up in glowing if at times way too sugary sentiments. Director Lance Rivera, who cut his comedic teeth on The Cookout, has cooked up a knack here for breathing new life into old school Christmas season screen characters. If only there were a more surprising and amazing story to tell.

Gabrielle Union, who is never less than perfect no matter what she’s up to in a movie, is Nancy, an exasperated single mom with an outwardly charmed, MacMansion lifestyle and three vivacious, charismatic kids. But that cheery facade soon cracks, revealing an egotistical rapper absentee dad J-Jizzy (Charlie Murphy). He’s an adequate though begrudging provider who’s in no way into fatherhood, ignoring his disappointed offspring and instead into cruising all over town, hooked on the celebrity life.

As a result, Nancy’s a fulfilled, if at times stressed out mom, but she’s been romantically deprived for some time. Her circle of concerned and caring girlfriends have assorted, occasionally borderline kooky ideas about hooking her up, but she needs a big boost to her shattered self-confidence first. Her kids have their own ideas about how to do just that, and they’re certain that a few consultation sessions with the local department store Santa (Morris Chestnut), will make it all happen. Though Santa’s got his own game plan when it comes to healing Mom’s broken heart, and it’s a bit on the up close and personal side. 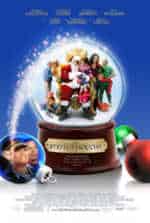 The Perfect Holiday has many moments of warmth, charm and humor, but like the trimmings on the tree, they hang together just a little too loosely. Queen Latifah’s whimsical narrator and Terrence Howard as mute meanie Mr. Bah Humbug, serve as a kind of Greek chorus sideshow trying their best to keep all the antics hanging together. But The Queen should have been given a lot more to do than just mulling the action here and there, when not juggling random snowflakes falling from the sky.

Meanwhile, never disappointing in his periodic upstaging of everybody else around him, is Charlie Murphy, who dives into his designated villain role as the rude and raucous superstar rapper, with dizzying relish. Though Katt Williams as J-Jizzy’s disgruntled recording producer sidekick is way too little seen or heard from. All totaled, The Perfect Holiday is far from perfect, but its holiday heart is in the right place.