You could say that the pen may sometimes be mightier than the sword, if movies like Superbad, Balls Of Fury and now Juno’s motormouth screen version of talk radio is any indication. In a reverse trend contrast to all of those superheroes of massive pecs and spare speech, this new breed of talkaholic nerds and misfits is catching on at a fast pace, with cutting words whose verbal firepower may pose a real challenge to special effects driven daredevil blockbuster feats.

That dynamite diminutive, deceptively angelic-faced babe Ellen Page, who recently sharpened her acting skills neutering a pedophile in David Slade’s sleaze slasher fare, Hard Candy, switches to moody teen rebel with a creative clause, Juno MacGuffin. Deciding impulsively to lose her virginity to barely boyfriend Paulie (Michael Cera), Juno gets to experience a two-for-one knocked up and deflowered life event, to her dismay. After sauntering over to the local abortion clinic where she’s turned off when greeted with a plate of boysenberry-flavored rubbers, the gabby, depressed high schooler makes up her mind to relinquish the baby to childless couple Mark and Vanessa Loring (Jason Bateman and Jennifer Garner) on the upscale side of town, whom she discovers advertising for parenthood in the Pennysaver classifieds. 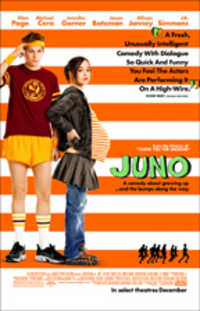 If Michael Cera was ‘superbad’ when last spotted on screen, this time around he’s really superbad, as a jock geek indifferent baby’s daddy who’s more into color-safe bleaching his gym shorts, applying deodorant to his inner thighs, and dropping Juno for an ugly duckling who smells like soup. But Juno is preoccupied with her own set of denial issues, making moves on Mr. Loring and thereby getting him destructively in touch with his own once youthful thwarted creative musical dreams, and concurrent fears of impending adoptive fatherhood.

At the same time, career woman Mrs. Loring’s nervous wreck obsessive longing to be a mother no matter what, both freaks out the immature gabby sixteen-year-old, and unclouds her defiant teen attitude long enough to sort out what’s hopefully best for everybody in the long run. Including a chance for her to finish raising herself instead of a baby, by postponing motherhood for some future date. And even testing the waters of post-partum romance.

Juno excels chiefly in its smart, stylishly rude, tangy teen dialogue, courtesy of young screenwriter Diablo Cody. The former full-time stripper and phone sex operator – who incidentally married her online boyfriend – boasts career choices in life that seem to have assisted her in perfecting talking dirty on screen into a science, I guess.

There are a bunch of glaring narrative rough spots though, that could have used some ironing out. For instance, it never makes sense that Juno’s own set of loving and supportive parents – dad and stepmom Mac and Brenda (J.K. Simmons and Allison Janey) couldn’t have raised and even adopted her kid themselves. Nor that Juno is adamant that she never wants to see the baby again, yet Mrs. Loring lives nearby and they do run into each other at the mall. But Juno is such an original, standout organically splendid ensemble creation, that all its faults can be taken in comparative stride.