After a year of creative reflection, recharging and regrouping, Dozie graced the Bay Area with his smooth soulful melodies in a stirring performance at Maxwell’s Lounge in Oakland Friday night. Accompanied by the skillful Maxwell’s Lounge house band, Dozie performed his fan favorites and debuted long awaited new material.

Some were a little concerned as the show opened, as it appeared that Dozie’s voice might be hoarse and a few off-pitch notes were detected. Critics commented he was trying too hard. After a deep swallow of water after the second number, Dozie gradually found his zone, working both the stage and the crowd with command. 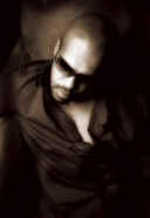 As typically witnessed at a Dozie show, women swayed and swooned on the dance floor, caught up in the rapture of his spiritual groove. His sweet soulful lullabies soothed restless souls. As Dozie penetrated the audience, women in their seats were convinced he was singing only to them. Men were taking notes – or should have been.

Highlights of the evening included an acoustic version of “Gabriel’s Lounge,” the Dozie favorite that captured the hearts of so many and locked in fans-for-life. Seated on the steps of the stage, and accompanied by a trio of soprano sax, percussion and guitar, Dozie created a dynamic intimacy, appropriate for the very personal lyrics and spirit of the song.

Generous with his appreciation for his fans, Dozie cruised the audience shaking hands, giving hugs and kisses, being available for photos and autographing CDs after the show. Dozie invited one lucky lady on stage in a very special serenade of “Sensuality” (“Superstar”), the song that touches every woman in that very special place. Many could be seen fanning themselves from the hot combo of rhythm and lyric. Ooh – those lyrics.

Dozie impressed those seeing him for the first time with his wide vocal range and passion for his art and craft. His presence on stage was captivating. His sincerity was clear and observable.

After a slightly rough start, Dozie did deliver in the end, including setting the room on fire with “Magdelena.” Big props to the band for supporting this Dozie favorite and producing a house-shaking performance with this one! When he announced his last song, the dance floor became flooded with those who’d until then, restrained themselves and were now seizing their final opportunity to physically participate in the magic. Fortunately, the opportunity will present itself again early next year when Dozie returns to Maxwell’s Lounge for regular shows.

Those who have his first CD testify that they’ve “worn it out!” and are thrilled that his next CD may be available soon. His new material demonstrates that he not only hit it with his first CD, he’s truly “got it” and that kind of “it” begins to take on a life of its own. Look out world – he’s coming!

Check him out at www.myspace.com/dozie

Careers in the Key of Life ([email protected])