This film contains a lot of gratuitous violence, depicts a romance between a bi-racial couple, the theme of ‘no mercy’ features strongly and ‘revenge is good’ is the clear message. The original Karate Kid was 16 and on the cusp of manhood, the remake Kid is 12 and still a child and this disparity gives the film an incongruous feel, made worse when the young boy and his girlfriend talk and behave like sensible adults. Equally bizarre is the fact that all the Chinese kids are taller than the American kid, including the girlfriend, and as any self-respecting 12 year old girl will tell you, dating someone shorter than yourself is a total no-no.

Dre (Jaden Smith) and his recently widowed mother (Taraji P. Henson) leave Detroit to move to Beijing where Dre struggles to fit in. He finds a mentor in a local maintenance man (Jackie Chan) and the young American becomes empowered and is finally able to stand up to the bullies who brought torment to his life. 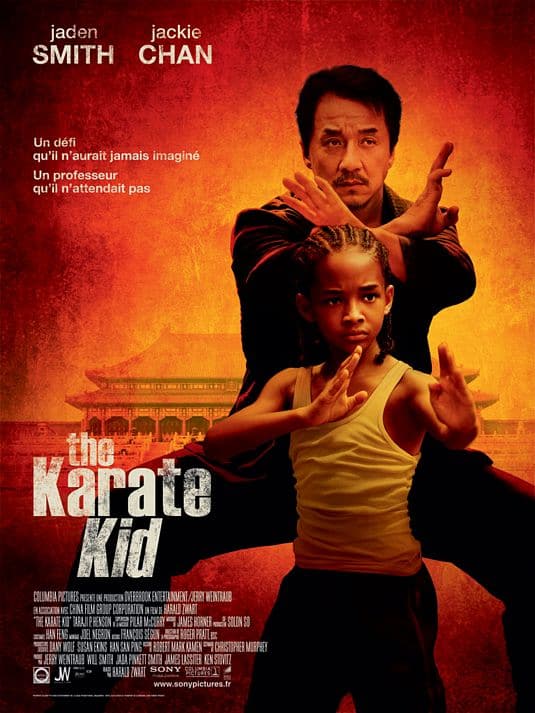 It is, of course, a classic underdog story, and Chan is the ultimate coiled spring, ready to pounce when the moment comes, which it does, but another moment comes soon after which is not quite so welcome. This is in the form of a pretty cheesy scene when Chan opens his heart to his young mentee and has a good old sob. I’m not sure what the Chinese think of the fact that the average American is happy to bare his soul to any passing film crew, but I’m sure it’s not complimentary, and this display by an icon like Chan will probably have the entire Chinese race worried the next time he shows up in a movie it’ll be in a kimono and ankle stockings. And while we’re on the subject of being girly, Dre’s mother is a difficult act to swallow. While assuming the role of a caring mother, she looks and sounds more like a hooker and when her young son is collapsed in the ring, physically broken and in tears, she’s there cheering him to get back up and fight which is the oddest behavior I’ve ever seen in a Mom. I’m sure Jacqui Stallone would be appalled.

Jaden Smith delivers an outstanding performance, as expected, but he is nowhere near powerful enough to carry a film. And is it such a great idea for celebrity parents to encourage their young to take this route? Obviously Jaden’s parents think so and will no doubt lead standing ovations for their talented offspring, clearly ignoring the child-star syndrome, one of whom makes the news every week. Is the desire to prove you have produced something of value really that blinding?

It’s hard to imagine where this film will find an audience. It’s far too juvenile to appeal to adults, teenagers over the age of 16 don’t want to watch a film with a 12 year old kid as the star, and if parents take their young children to see this they are giving their approval to violent revenge and the next time there’s a tragedy in a school playground CNN will know where to point their finger. But of course, this won’t bother Mr. and Mrs. Smith, as they will be far too busy building their dynasty to have time to watch the news. Oil? What oil? And Lindsay who?

Rating: PG (despite violence and use of the s*** word)