WHO ARE THE JANES?

This is a documentary about a group of middle-class females, the Janes, who went rogue. It happened half a century ago but their clandestine activities are suddenly back in the spotlight. They’re the renegades who gave illegal abortions. 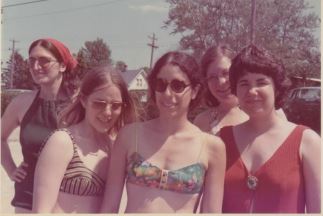 It’s Chicago in the late 60s. The Baby Boomers that followed the Silent Generation are making a lot of noise. They’re campaigning for civil rights, protesting the Vietnam war and joining ranks with the Black Panthers. Amongst them is one Heather Booth, a 19-year-old sophomore. As committed an activist as she is, she becomes exasperated with the chauvinism that infests the movements she’s working so hard to support.

It seems circa 60s male isn’t as enthusiastic about women’s rights as he is about his own. So when Heather steps in to arrange an illegal abortion for a desperate girl, she’s unfazed by the avalanche of identical requests that follow.

Far from discouraging them, she spreads the word that anyone in need should call her dorm and use the code name ‘Jane.’ And thus Heather’s activism finds its home. When willing helpers join the crusade, the ‘Jane Collective’ is born.

The girls are young and look more like ‘rock chicks’ than revolutionaries. But revolutionaries they are, changing the lives of countless, grateful women.

It’s the recollections of five of these women that lead this documentary through its twists and turns. The unsung heroines of the 70s are now IN their seventies and their stories are compelling.

They knew they were risking life in prison but their only tales of courage are about others. Even when they got arrested, they kept going, intrepid warriors charging through with sabers rattling. With such exciting material, it’s unfortunate the filmmakers failed to recreate the drama that each day brought. It’s equally unfortunate that the tumultuous ending is casually skipped over and the ladies never get chance to bid us a final farewell.

While the Supreme Court ruminates about whether to uphold Roe v Wade, perhaps the objectors could take a look at this film. Or perhaps they already know that hospitals had to open septic abortion wards for women who arrived in agony, at death’s door. In many cases, they got wheeled straight through.

But if girls and young mothers dying is of no concern, perhaps they should read the studies that claim crime nose-dives 20 years after abortion becomes legal. These studies are highly controversial, but not as controversial as America returning to the dark ages. That would be embarrassing.

Needless to say, these rogue women became highly adept at evading the law – that is, until a disgruntled bystander reported them to the police. It’s ironic that these opinionated people have nothing to say about who should pay to raise the child they insist be born. Not them for sure. They’re too busy voting for a political party that’s against universal healthcare. It seems anti-abortionists only care about fetuses. Once the kid is born, it’s on its own.

Tia Lessin was nominated for an Academy Award for her work as a director and producer of the Hurricane Katrina survival story “Trouble the Water,” winner of the 2008 Sundance Grand Jury Prize and the Gotham Independent Film Award. She directed and produced “Citizen Koch,” about the rise of the Tea Party in the Midwest, which also premiered at Sundance and was shortlisted for an Oscar in 2014. “The Janes” is the third feature-length documentary that Tia has directed. In 2001, Tia received the Sidney Hillman Award for Broadcast Journalism for directing the documentary short “Behind the Labels” about the labor trafficking of garment workers on U.S. Saipan.

Tia was on the producing teams of Palme D’Or winning “Fahrenheit 9/11,” Academy Awardwinning “Bowling for Columbine,”and the Grammy-winning “No Direction Home: Bob Dylan.” She produced the film “Where to Invade Next” and executive produced “Fahrenheit 11/9.” Her work on the 1998/99 television series “The Awful Truth” earned her two Emmy nominations, one arrest, and a lifetime ban from Disneyland.

Tia is a past fellow of the Open Society Institute and the Sundance Institute and has served as an advisor to IFP, Sundance and Creative Capital artists. Her filmmaking has been supported by The Bertha Foundation, Chicken & Egg, Cinereach, Creative Capital, The Ford Foundation’s JustFilms, Fork Films, the International Documentary Association’s Pare Lorentz Fund, the MacArthur Foundation, New York State Council on the Arts, Rockefeller Brothers Fund and the Sundance Institute DocumentaryFilmProgram. She is a member of the Academy of Motion Picture Arts & Sciences and the Directors Guild of America.

Emmy-nominated filmmaker Emma Pildes has an extensive background in, and boundless love for, non-fiction storytelling. “The Janes” is Emma’s directorial debut. As one of Pentimento Productions’ principal producers, Emma produced “Spielberg,” “Jane Fonda in Five Acts,” and “Very Ralph” — all for HBO Documentary Films. “Spielberg” had its world premiere at the New York Film Festival in 2017 and was later nominated for an Emmy. “Jane Fonda in Five Acts” had its world premiere at Sundance Film Festival in 2018 and its international premiere at Cannes Film Festival.

The film was nominated for the 2019 Emmys. At PBS’ American Masters, Emma helped to produce the Emmy and Peabody-award winning “LennoNYC,” Emmy-award winning “Inventing David Geffen,” as well as “American Masters: Billie Jean King.” Born and raised in Chicago, Emma graduated from Sarah Lawrence College and is based in Brooklyn, NY.

Daniel Arcana is an independent producer, writer and creative strategist with over 25 years of professional experience in content creation and brand marketing. In addition to co-developing and co-producing “The Janes,” Daniel is a consulting producer for Doc Shop Productions, where he co-developed TNT’s “American Race” documentary series
featuring Charles Barkley, the Netflix documentary Series “AFFLICTEDAfflicted” and the feature film “#UNFIT: The Dangerous Mind of Donald Trump.”

Daniel is also the co-founder and former President of Exopolis, a multi award-winning creative agency and motion graphics studio; best known for creating the original network launch of “Nicktoons” and its work for Apple, including the global launches of both the original iPhone and the iPod “colors” campaign. Exopolis worked extensively for clients such as: Universal Pictures, Disney, WB, Sony Pictures, Dreamworks, Nike, Coca-Cola, Microsoft, Xbox, Delta Airlines, Formula 1, VH1, HBO, Cinemax, TCM, IFC, Sundance Channel, A&E and was the recipient of many Key Art and Broadcast Design awards.

Emmy and Peabody award winning producer Jessica Levin has devoted her career to creating high quality non-fiction films, bringing to each new project her passion for music and the arts as well as her seasoned approach to archival material and inventive storytelling. She has collaborated with Susan Lacy on a rich variety of films, including the American Masters documentaries “Joni Mitchell: A Woman of Heart and Mind,” “Judy Garland: By Myself,” “No Direction Home: Bob Dylan,” “Annie Leibovitz: Life Through A Lens,” “LennoNYC,” and “Inventing David Geffen.” Some of Jessica’s earlier producing credits include PBS projects “Swingin’ with Duke” and “The Shakespeare Sessions” plus ABC specials “Wingspan” and “The Beatles’ Revolution.”