This story is about the bonding of a cynical, mean-spirited old man and a sweet, generous youth who impact so much on each others’ emotions that they both finally become whole. At least, that’s the story the filmmakers wanted to tell and I know this because the actors recite sign-posted dialogue at every turn.

Worse still, the characters lurch so erratically from one behavior to another I got a little travel sick about half-way through. If there had been any kind of conflict I’d have had to run to the bathroom but, as the director/writer thinks drama needs only the token odd flare up, I managed to stay steady. 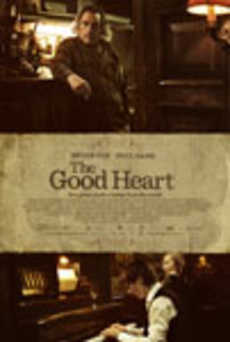 The paths of Jacques and Lucas cross in a hospital room, where they both lay damaged by the hand life has dealt them. Their exchanges are brief and weightless so it is surprising when Jacques seeks out his young friend and moves him into his home, an apartment above his run down New York bar.

Welcoming a stranger into your home is an extremely kind act but the audience is then fed startlingly contrary information by being shown Jacques’ rude, aggressive behavior to his regular customers. This abrupt turn-around is accompanied by a diatribe by Jacques of his Scrooge-like views to an expressionless Lucas.

In case you haven’t quite got the picture, Jacques is Basil Fawlty without the bubbling repression, rapier sarcasm or funny walk and without those all you have is a droning tyrant. So to counteract the tyrant, Lucas plays the gentle, child-like innocent but to such an extent he becomes a non-personality and drifts through most of the film as a yawn.

Many of the moments feel staged, one of which is when five men pile into the bar, offer Jacques cash to buy his business, give the grumpy old geezer time to spell out an essential-to-the-plot fact/make a painful attempt at humor, and then they all pile out.

Another is when a French air hostess wafts in, claims to be homeless, acts virtuous one minute and whore-like the next, depending on the dialogue Jacques has to deliver at the time. Lucas’ character arc is driven by his relationship with this bi-polar mademoiselle but as their super-quick marriage is solely so she can get herself a green card and there is never even a pretense at love, I’m wondering why the writer ever had any hope that that would work.

There is a very, very big question as to why Jacques decides to ‘adopt’ Lucas in the first place and which is the entire basis of the film. The reason we are given is that Jacques wants to keep his legacy alive, but as all he’s got is a crummy New York bar, this motivation doesn’t work at all. Also, Jacques is on his fifth heart attack, so why is he having his epiphany now? To make things even more uninteresting, there is a total absence of any back story or insight into any of the characters and all we know about them is what they tell us, so we are never invited in and thus remain uninvolved.

The errors in this script are lit like Bellisha beacons and even with a comparatively small budget of $4M, it’s hard to understand why the production company didn’t shell out a couple of hundred bucks to get some decent notes. Hollywood is knee-deep in script analysts, doctors, editors and any kind of story consultant you want, so why didn’t someone pick up the phone? Could it be the director/writer had creative control and he decided his script was perfect and he didn’t need notes from anyone? If so, there is only one response. Oh dear me.

I’m not going to comment on the directing because it doesn’t really matter, although I suppose if you’re bored enough it does pass the time to study the technicalities. But if we’re going to do that we might as well go back to silent movies, which might sound like a terrible idea to you, but having just sat through ninety five minutes of drivel I think I’m bound to disagree.