Once you’ve seen the poster you know Bruce Willis and Tracy Morgan are teamed up as partners in a buddy comedy and, as a new combo of guys in a hackneyed scenario has worked amazingly well before, there’s every chance this could be the next movie franchise to hit our screens.

But when phenomenal success has come knocking before, the filmmakers have always taken a huge stride away from all its genre precedents and created something so original there is nothing to compare it with. Unfortunately, the Cop Out writers didn’t have enough confidence in their idea to go out on a limb and although there are some funny moments and there’s plenty of pace, there is absolutely nothing to suggest there will ever be a Cop Out 2. 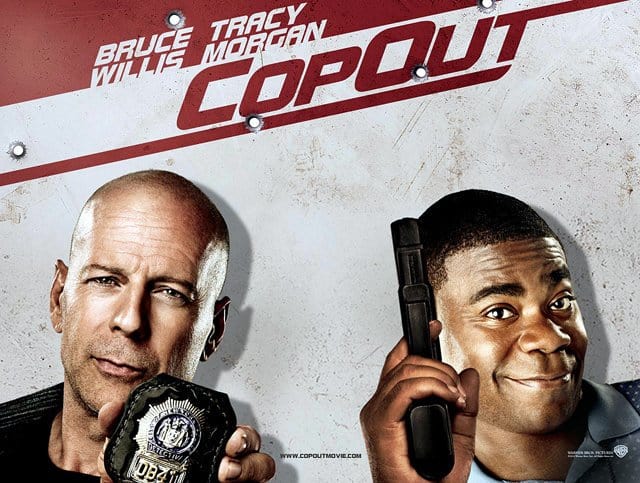 The set-up starts entertainingly enough, although I find movies that reference other movies to be a touch arrogant and risk taking the audience out of the movie they’re trying to watch. The latter is never a wise move, particularly if you have nothing spectacular up your sleeve, and if it’s an attempt at realism, referencing a romantic comedy in an action crime story can really grate.

The writers did have the sense not to mention THAT movie but the signature music is eerily similar and before I knew it Axel was there, before my very eyes, reminding me what a trip it is when it’s done right. I’m sure this couldn’t have been the composer’s intent but playing safe often has its own reward.

The movie reference device is used excessively at the beginning and then mostly disappears, which is rather the way this film goes. Characters pop in when needed and then leave forever, robbing the main characters of anything more than superficial interaction with them and leaving the audience with a sneaky feeling that each one was created for the convenience of the plot.

The only character who sticks around is a girl the two rescue but, as she can’t speak a word of English, communication is limited and when she gives them the very thing they are searching for our suspicions about her presence are confirmed.

By this time it’s pretty clear this lack of interaction is because the main characters lack any kind of depth and the writers are afraid to stretch them beyond anything more than banal exchange. This thought is confirmed by the excessive time spent on a knock- knock joke that wouldn’t have split any sides in a boys’ high school playground.

With so much time spent on quoting other movies, there is little left to set up Jimmy and Paul as incompetent mavericks, which is the writers’ intent, so to make up for it we are fed some pretty on the nose dialogue by the police chief -“there’s a right way of doing police work, and there’s the way you two do it” which may have satisfied the producers but doesn’t work for me at all.

These two experienced cops are clearly street bright and far from inept, but when an attempted arrest falls apart they get suspended. This is a grossly under motivated reaction but obviously the best the writers could do to get the story rolling. Our two heroes also show they are far from incompetent in the face of some religious Mexican gangsters (which played as silly as it sounds) which leads to a torture scene and some brutal murders which are frankly bizarre and unwelcome in a caper movie filled with light-hearted banter and domestic disharmony.

One thing that is consistent throughout is Tracy’s delivery of his lines – he shouts each word as loud as he possibly can which wears on the audience and must have been murder in rehearsals. Bruce plays Jimmy in a mostly understated manner which could be because the director wanted to balance the over excited with the laid back, but personally I think Bruce was quiet because all that shouting gave the poor man a thumping headache which means I might not be the only one who hopes there will be no green light for a sequel.