If the best thing that might be said about a football movie, oddly enough, is that it can be a really entertaining experience for anyone who could care less about sports, then The Express is a solid touchdown. Skeptical couch potatoes take heart, a knowledge of the game is rarely a requirement either.

Though admittedly spending too much time on simulated action out on the field, this Gary Fleder directed biopic delving into the short, tragic life of college football great Ernie Davis – the first African American to win the Heisman Trophy during racially turbulent times in the mid-20th century – is grounded as much in personality and historical surroundings, as the intense heat of the game. Adapted from the Robert Gallagher book, Ernie Davis: The Elmira Express by screenwriter Charles Leavitt (Blood Diamond), The Express stars Rob Brown (Finding Forrester) as the strong-willed young Syracuse University running back who was as determined in his faceoffs against competing football teams, as in opposing off-the-field racial antagonism. 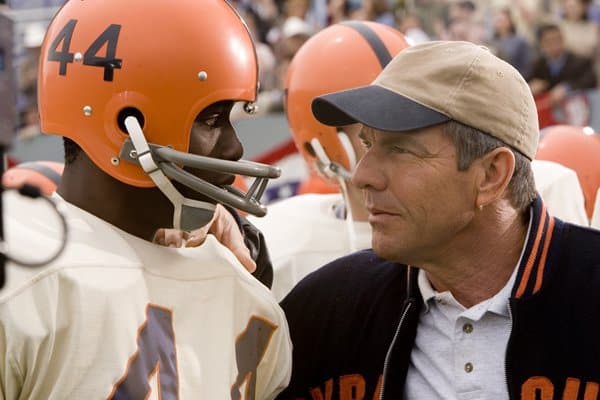 Dennis Quaid provides a complex, conflicted dramatic counterpart to Davis’ bruised but unbroken graceful innocence, as his caustically inclined college coach, Ben Schwartzwalder, who’s not too old to learn a few things from a younger generation challenging social traditions. And Charles S. Dutton lends warmth and dignity to the story as the patriarchal bedrock of the family clan, radiating salt of the earth Pennsylvania coal mining country grit and compassion. A tender and inspiring coming of age tale from the heart.