The paths of terminally-ill Edward Cole (Jack Nicholson) and Carter Chambers (Morgan Freeman) probably never would have crossed, if they hadn’t ended-up on a cancer ward with a strictly-enforced, two patients per room policy. For the former, as the billionaire businessman who owns the hospital, could easily have afforded a private suite. But cancer has proven to be a great equalizer, and he finds himself stuck in a bed next to a relatively-lowly auto mechanic. 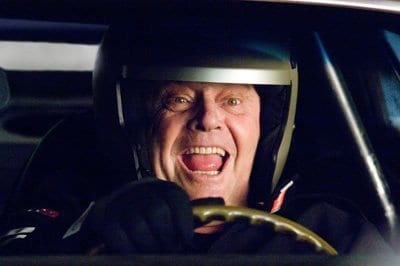 In truth, their difference in social status doesn’t mean much anymore, given that they’re both sickly and grouchy and have been dealt the same dire prognosis of less than a year. The commiserating curmudgeons soon discover that they also share an aversion to the idea of just resigning themselves to their fates and slowly wasting away attached to tubes, monitors and hi-tech machines.

Determined to go out on their own terms rather than capitulate to cancer, they start compiling a “Bucket List” of things they want to do before “Kicking the Bucket.” Giving full vent to their imaginations, they come up with everything from getting tattoos to visiting the Great Wall of China, the Pyramids and the Taj Majal to race car driving and skydiving to scaling the Himalayan Mountains to finding the perfect woman to joining the proverbial Mile High Club while cruising at 30,000 feet in the air aboard Edward’s private jet. 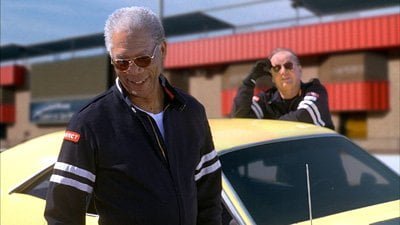 The fact that Ed’s only visitor in the hospital is his deferential, bespectacled assistant, Thomas (Sean Hayes), means that the rich buzzard is pretty much friendless and free to indulge his fantasies. But, Carter, a devoted family man, has the wishes of his wife of 47 years (Beverly Todd) and three attentive children to consider. However, once well-heeled Edward offers to foot the entire bill for their hedonistic getaway, Carter can’t resist the chance to spend his waning days doing everything he ever dreamed of. 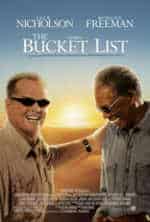 So, ignoring doctors’ orders, they make their break and embark on a macho male-bonding opportunity with the help of the tweedy Thomas who handles the arrangements at each port of call. And as the intrepid gradually check all of the above items off their checklist, they reminisce, philosophize, and most of all, misbehave.

Thus unfolds The Bucket List, a surprisingly lighthearted saga for such a sobering theme. Directed by Rob Reiner, the movie co-stars Jack Nicholson and Morgan Freeman in roles they’ve practically trademarked. Nicholson steals the show as that bombastic bon vivant we’ve all come to adore, opposite Freeman’s equally-endearing portrayal of a wizened sage wise beyond his years.

The only fly in this otherwise well-oiled buddy adventure’s ointment arrives when Carter is temporarily tempted to break his marriage vows by a ready-and-willing, seductive vixen (Rowena King). Not to worry. When was the last time you saw Morgan Freeman touch a woman in a movie who wasn’t dead?

A feelgood, end-of-life flick that manages to transcend its sobering subject-matter and somehow buoy one’s spirits.

Rated PG-13 for profanity, mature themes and a sexual reference.