Noir meets newsroom mania in State Of Play, a thoroughly engrossing nailbiter, though the dark details that eventually come to light pale in comparison to massive narrative expectations preceding them. Based on the acclaimed BBC drama series of the same name, State Of Play, with its many threads and suspenseful pacing, comes just about as close to fast forward simultaneous multiple perspective reality as a movie can get.

Russell Crowe glams down his macho leading man image as jaded, stringy haired brains over brawn scruffy DC roving, or rather prowling, defiant vigilante reporter Cal McAffrey, at the barely fictitious big city rag, The Washington Globe. When a petty thief turns up dead in an alley, a passing witness on a bike finds himself in a coma after being shot too by this mysterious figure with highly cultivated sniper skills, and the young research assistant babe of rising star Congressman Collins (Ben Affleck) falls under a subway train, McAffrey is less enthused than usual about getting on the case. It seems that Collins is an old college buddy whose wife (Robin Wright Penn) had been shacking up with McAffrey on the sly. And the guilt ridden reluctant stud recoils from pursuing a story rapidly morphing into dirty laundry involving tabloid gossip that Collins was having an affair with his dead assistant. 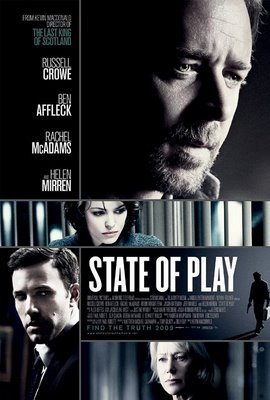 If you’re still following all this lurid seat of government hanky panky, hang in there, because there’s much more. Collins also happens to be heading an investigative committee ferreting out the sinister dealings of Point Corp, a massive security contracting corporation that has cleaned up financially by providing a US government outsourced privatized army of its own during the current Middle East ‘Muslim Terror Gold Rush.’ And as that war wanes, the predatory defense enterprise is seeking to move its insidious monopoly operations stateside by militarizing Homeland Security.

Which leaves the audience, along with Crowe’s agonizing reporter, with the huge, never a dull moment predicament. That is to say, was the research assistant determined to commit suicide after being tossed aside by loverboy Collins, did she know too much about Point Corp and so had to be tossed under a subway train to silence her, or was it a case of any, all, or none of the above?

Wading into the murky waters to eagerly sort out all these toxic antics while sexing up the dull as doornails newsroom, is gossip minded, scoop obsessed rookie reporter Della (Rachel McAdams) on sidekick duty with an initially far from enthused McAffrey. Helen Mirren also throws in her two cents, whether solicited or not, as the bossy newspaper editor showing her stuff as a woman bent on keeping intermittent loose cannon McAffrey in line.

More Clark Kent than Superman, Russell Crowe’s high IQ, pen is the sword amateur gumshoe reporter doesn’t hesitate when necessary to tone down his tough guy persona, and effectively play stressed out girlie man to the menacing baddies. Though the political and corporate scandals which loom so large throughout, and who exactly is playing whom, wimp out in comparison as director Kevin Macdonald (The Last King Of Scotland) and co-screenwriter Tony Gilroy (The Bourne Trilogy) tease with ballsy controversy but eventually opt for not making waves. But pot shots taken at the online rumor mongering that passes for journalism these days, sleazy lackey publicists, and the dismal state of backroom corporate and Congressional conspiracies, stylishly cut through the tangled scenarios like a deadly dagger.