The misleading TV commercials for Observe and Report set you up to expect a storyline that’s practically identical to that of the recently-released Paul Blart. After all, both movies revolve around a bumbling but dedicated security guard who wants to become a real cop, who still lives at home with his mom and who has a crush on a cute clerk at the shopping mall where he works.

Truth be told, however, the two pictures have precious little in common beyond that similar-sounding premise. For, where the relatively-clean Blart is a lighthearted romp that’s appropriate for the whole family, Observe is the direct antithesis, a relentlessly-dark and disturbing celebration of depravity unlikely to resonate with any decent demographic.

Written and directed by Jody Hill (The Foot Fist Way), this R-rated raunchy teensploit is ostensibly-designed to up the ante in terms of the shock genre’s profane, prurient and politically-incorrect index. The subject-matter mined for laughs here includes drug addiction, date rape, stun gun tasering, stalking, bullying, stealing, sexual assault, abusive relationships, ethnic, gender and sexual preference slurs, and prolonged, full-frontal nudity. Unfortunately, despite pushing the envelope, the film breaks a cardinal rule of comedy by failing to be funny. 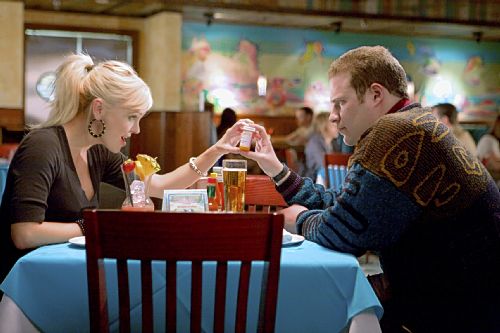 Most of the offensive antics unfold around the Forest Ridge Mall where we find head of security Ronnie Barnhardt (Seth Rogen) as obsessed with crassly courting a cosmetics consultant (Anna Faris) as with apprehending the flasher who’s been exposing himself to female patrons. For instance, consider the exchange between the intrepid protagonist and a suspect who feels he’s been racially profiled named Saddamn Hussein (Aziz Ansari) during which they take turns yelling “[Expletive] you!” back and forth at each other ad infinitum until the scene peters out.

Also among the lowlights are bits making light of substance abuse, including a running joke about Ronnie’s foul-mouthed alcoholic mother (Celia Weston) and another about a co-worker (Michael Pena) hooked on heroin. I hope you’re lucky enough to walk out of the theater before the bloody finale featuring lingering, slow-motion shots of the pervert’s swaying private parts right before the creep gets what’s coming.

I suppose this movie could’ve been worse. I’m just not sure how.

To see a trailer for Observe and Report,