As usual, another “terrorist” round-up receives the Al-Qaeda label, what an organization this must be. They are so cunning and sophisticated, yet didn’t manage to escape the police raids, despite having advanced warning thanks to ex-Anti Terror Chief Bob Quick.

Bob Quick resigned after carrying a secret document into Downing Street, which was visible to the whole world (via the photographers waiting outside). The document clearly showed details of the raid that took place (earlier than planned), including addresses!

How can a person involved in Anti Terrorism make such a mistake?

As a result of this blunder, the raids on 10 properties in the North-West of England had to be carried out earlier than planned and some officials believe the operation was compromised. 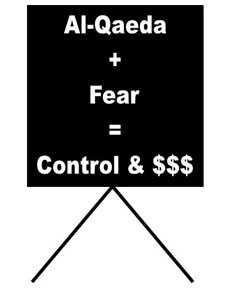 So far, none of the properties searched have revealed any concrete proof that the occupants were involved in any terrorist plot, although the authorities believe that those involved were probably “thinking” about it.

If “thinking” about committing a crime was an offence, we would probably all be arrested and locked up.

There have been so many of these raids over the last few years, but only a very small percentage of those arrested appear to be actually guilty of anything. Yet they are frequently held in custody for very long periods before eventually being released.

Were these latest raids really an attempt to catch “Al-Qaeda” terrorists, who were pretending to be students? Or were those arrested perhaps guilty of nothing more than using their student visas as an excuse to enter the country for other purposes, like doing a little work on the side and not paying tax (as so many people do in other countries as well)?

Could it be that the “Pakistan connection” just lately is designed to provide public support for the US attacks we are frequently seeing on Pakistan, and at the same time add fuel to the ever growing Islamaphobia appearing in the UK and the United States?

Why is it that British citizens of Pakistan origin (or Muslims, if we are to be honest), pose more of a terrorist risk than any other race? We are told that students from Pakistan are entering the UK as part of a “long term” plan to create terrorist cells, but this can only be guesswork at best. We could just as easily say that the Chinese (for example) living in Britain are part of some future Communist plot. And what about Israel, a country well known for undercover operations, should we give some thought to Israeli students as well?

Let’s not forget Osama bin Laden’s connection to Al-Qaeda and the CIA (who he also worked for). Is it so difficult to believe that they are all one and the same? Who really benefits from this “terrorist” organization?

The 9/11 attack was blamed on Al-Qaeda and this gave the US an excuse to invade Afghanistan (a war that was planned before the attack took place). The Al-Qaeda connection was also used for Iraq, but Saddam Hussein was not involved with them (nor did he have any WMD).

We are told that almost every terror attack that has, or might take place, is the work of Al-Qaeda. The authorities (in the US and UK) have tried to make us believe that this “terrorist” organization is a threat to our very existence, yet what has Al-Qaeda (if it really does exist) actually gained from all of this?

In the last 8-9 years there have been a number of “dubious” terrorist attacks, and as a result the public has been forced to accept ever increasing control and restrictions in their lives. How many times before in history have we been told to “unite” against an enemy that has been created for us?

The only winners of this “war on terror” are those involved in the oil business and the suppliers of arms and military equipment. The oil companies have finally got back into Iraq, and if Afghanistan can be brought under control, they can place an oil pipeline there as well. Sandwiched between these two countries is of course Iran, another country with huge oil reserves and the only remaining military threat (in the Middle East) to Israel, which is why they are receiving the same pressure as Iraq did at the moment.

In reality, any neighbour of an oil producing country has some strategic value to the oil companies. If not for the oil they produce, certainly for their ability to transport it (hence the interest in having some control over Pakistan).

As ever, it is all about big business and politics, and the rounding up of potential terrorists (and the fear factor) are just small steps in the many it takes to achieve their real goal. All we have to keep doing is ask who benefits the most from these situations, and this will tell us who the real terrorists are.