If you think your job is lousy, imagine your boss beating you when your performance isn’t up to snuff and keeping you in a cage when your shift is over. That’s exactly what happens to chimpanzees and other great apes that are used as “actors” in commercials, television shows and movies. According to a whistleblower who worked on the set of the new Speed Racer movie, a young chimpanzee playing the part of Chim Chim was allegedly beaten behind the scenes. But in an industry in which perception is everything, animal abuse usually occurs long before an animal arrives on the set.

Like human toddlers, baby chimpanzees are curious, playful and easily distracted. In order to get them to pay attention and learn to perform, chimpanzees are taken from their mothers when they are still infants, leaving both of them emotionally traumatized. Trainers force animals into compliance by beating them with fists and batons and shocking them with electric “jab sticks.” When not performing, they are kept in extreme confinement and deprived of all that is natural and important to them. 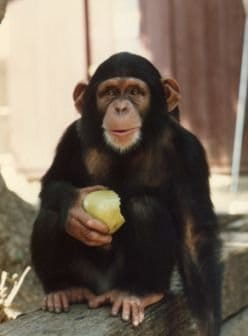 Time is money in the film, television and advertising industries, so there is a great deal of pressure for trainers to ensure that animals perform correctly in the fewest takes possible. These financial constraints can and do lead trainers to apply severe discipline and excessive force during training sessions to ensure that animals are on cue when they are on the set.

It’s little wonder that animals often snap. The chimpanzee playing Chim Chim in Speed Racer bit an actor. A grizzly bear named Rocky who had been used in a recent movie with Will Ferrell killed his trainer. Several years ago, actor Elisha Cuthbert suffered deep puncture wounds to her hand when she was bitten by a cougar while shooting a scene for the TV show 24.

In the jungles and rain forests where they belong, chimpanzees have rich emotional lives and complex social structures. These keenly intelligent animals make and use tools, cooperate to gather food, raise families and laugh and play. Orphaned chimpanzees are adopted by their aunts or older siblings, who teach them how to find natural antibiotics, avoid poisonous plants and build tree nests. All four species of great apes-chimpanzees, gorillas, orangutans and bonobos-are endangered.

The frivolous use of chimpanzees in the entertainment industry sends an inaccurate and damaging message to the public. Recently, the journal Science reported findings on two separate studies conducted in 2005 and 2006 by two independent groups of researchers. Both studies found that most people believe that chimpanzees are not endangered, assuming that because they are so widely used in commercials and movies, they must be flourishing in the wild. But the very survival of the species is in doubt. It’s estimated that there are fewer than 200,000 chimpanzees left in the wild, down from approximately 2 million in the early 1900s. Clearly, the public’s attitude toward animals is molded and influenced by media images.

There is no excuse for demeaning and debasing a species on the brink of extinction for the sake of entertainment and ratings. Next time you see an ad with a primate “actor,” turn the channel. And instead of going to a movie theater to see Speed Racer, I recommend renting the old animated series, curling up on the couch with your pooch and enjoying a night of animal-friendly entertainment.