First things first, let me issue a disclaimer alert. While most reviews of Sex And The City: The Movie are likely to draw comparisons, whether favorably or unfavorably, with the small screen sexcom version, I therefore confess to never having seen those shameless ladies showing off on television. No, not even once.

And while reviews of such movies, whether adapted from novels, comic books or TV shows, tend to be tainted with that been there, done that kinda jaded outlook, I for one can report that I went into this screening a total SATC virgin. And came out pretty much seduced by this frivolous, freaky foursome. 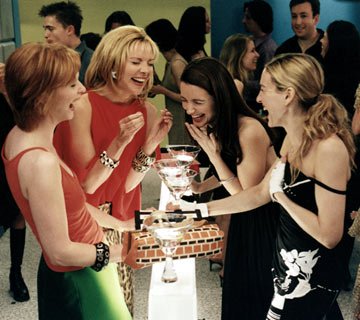 Standing quite on its own as a film just like those somewhat liberated lusty ladies, and without any requisite help from the show, Sex And The City: The Movie finds deeply neurotic clotheshorse Carrie Bradshaw (Sarah Jessica Parker, just in case you fellow SATC virgins didn’t already know) pressuring her very own sexy Wall Street tycoon Mr. Big (Chris Noh) into marriage, perhaps for all the wrong reasons.

The longtime couple is about to relocate together to a lavish live-in luxury apartment, and those gossipy girlfriends (Kim Cattrall, Cynthia Nixon, Kristin Davis) issue a dire warning to trust no man and make the deal official with a marriage contract. Or potentially risk future homelessness if they split down the road. And Big sorta shrugs his shoulders and gives in. 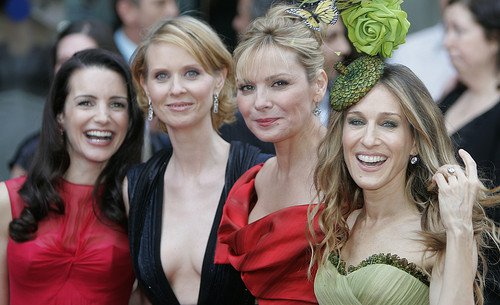 So the marriage ceremony is on at bookworm Carrie’s favorite haunt, the majestic 42nd Street library. And courtesy of Carrie’s editor boss at Vogue (Candice Bergen), she’s getting a huge wedding fashion spread in the snooty rag, decked out for her big day like a gaudy Christmas present wrapped in the glittery stuff three times over, natch.

At the same time, Carrie’s sassy bridesmaids are dealing with complicated issues of their own, ranging from infertility to infidelity, boy toy grief, and something to do with wearing sushi to bed for some change-of-pace savory foreplay, enough said. These female disaster-magnets seem to acquire bad news faster than the latest designer labels, however always drawing the line at knockoffs, whether that notion with multiple meanings refers to fake clothes or married men. 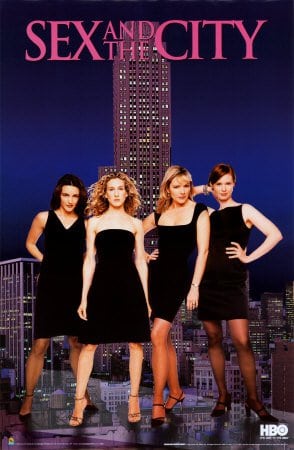 Writer/director Michael Patrick King, who also penned the famed TV series, has an impressive sense of style for both fashion and narration, accessorizing the movie with just the right amount of tragic and comedic ingredients. And brand new SATC girlfriend Jennifer Hudson, doing backup here as Carrie’s personal assistant and emotional anchor, likewise lifts the mood and spirit of the story. Though her essentially all-backdrop moments to shine are far too little seen and heard.

In any case, the verdict is in. SATC may wear sentimental and bubble headed surface appeal like a badge of honor. But it’s quite simply a euphoric guilty pleasure in ostentatious designer duds.