Not unlike the blockbuster reboot craze crowding movie theaters lately, Indiewood’s Ruby Sparks goes for that deja vu do-over too. In this case, with a modernized take on Greek mythology’s enduring Victorian stage to eventual musical and screen Pygmalion classic also known as My Fair Lady.

And in which Ruby Sparks screenwriter and star of the title, Zoe Kazan, drags kicking and screaming into the 21st century, the somewhat far fetched notion of complete male control over one’s created opposite sex object come to life. But with Kazan’s own female slant on such a mixed blessing male fantasy, this time around. 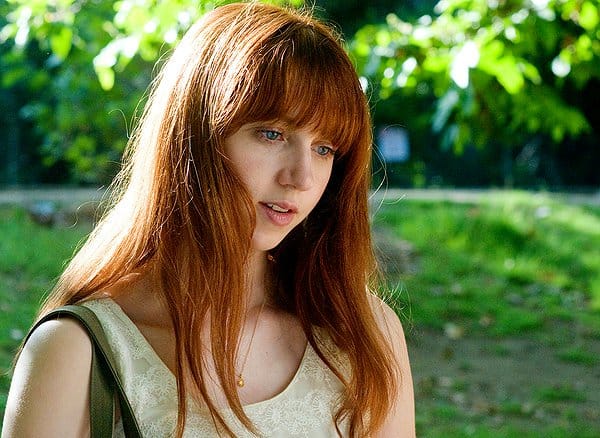 So how more or less likely is the finished product – of both the imagination controlled robotic object of male desire, and this movie – believable to audiences as well. Oddly enough, though the idea of female submissiveness as a narrative given may have seemed less strange in the past before the women’s movement reared its defiant head, male sexual misconceptions under the sway of a muted feminist reprimand that fuels this film, works nicely in rather unexpected ways.

Paul Dano is Calvin, a cynical one hit wonder novelist and deeply neurotic hermit with writer’s block. The breakout author of an angst-ridden bestseller at the age of nineteen, recent romantic reject Calvin can’t seem to get it together in the present as an adult, either creatively or socially.

That is, until a therapeutically prescribed short writing assignment from his frustrated shrink (Elliott Gould) – combined with a chance encounter in the park with Ruby (Zoe Kazan), an alluring female with a mane of flaming red hair – incites his deadened, rather dysfunctional imagination. As he incorporates the bright-eyed stranger into a story that precipitates her coming to life, and obeying his every command.

And that runs the gamut from cooking savory cuisine and speaking French, to eagerly fulfilling unconditional sexual obedience. In what his envious brother (Chris Messina) terms questionable, incestuously leaning ‘mind-cest.’ Or does she?

Ruby Sparks is curiously a gender-collaborative work in its own right, and in more ways than one. Counting Little Miss Sunshine co-director spouses Jonathan Dayton and Valerie Faris, and the Ruby Sparks leading lovebirds Paul Dano and screenwriter Zoe Kazan – who just happen to be shacked up partners offscreen as well. Which tends to conjure enticing sidebar fantasy speculation, about what may have made its way into the movie from behind multiple closed bedroom doors.

In any case, who cares. There’s enough in the spirited brew here, as a guilty as charged pleasure and despite occasional monotonous dramatic rewind, to both perplex and ponder.

The trailer of Ruby Sparks: