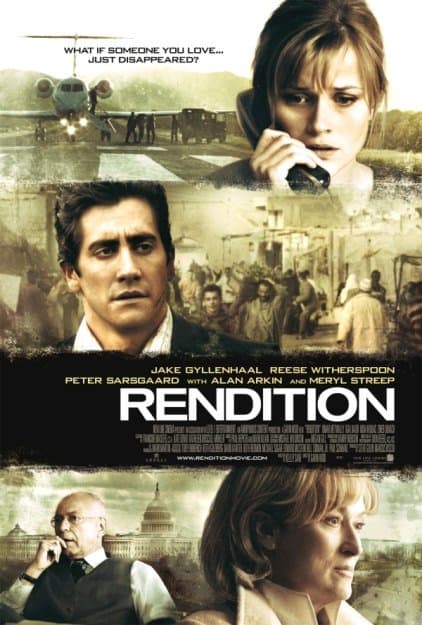 A high anxiety, guilt by association, denial of due process espionage thriller, Rendition refers to the controversial, highly contested policy of detention, disappearances and torture of terror suspects legalized under the Clinton Administration and extended under by President George Bush Jr. after the events of 9/11. Rendition follows the dismal destiny of an Egyptian born American chemical engineer (Omar Metwally) who is secretly dragged from an airport and kidnapped to an unknown Middle Eastern country, where he’s brutalized by CIA interrogators on the flimsiest evidence.

Lucky for the unfortunate guy that he’s got Reese Witherspoon in his corner, as his distraught very pregnant wife Isabella, who just won’t take no for an answer from the suits in DC about her missing spouse. While the mom-to-be fights for her man, Meryl Streep’s ambitious and wicked CIA boss fights for her career, but this time around the devil wears pistols. Meanwhile, the CIA rookie (Jake Gyllenhaal) overseeing the interrogation is going into occupational meltdown as all that torture wears him down, not to mention doing a number on his sex drive, and he relieves his stress smoking as well as inhaling communal hashish over at the local hip hop belly dancing club.

Reese really shows her stuff in a small but feisty role, as a woman on the brink of childbirth with more balls than the wimpy men around her. There’s also some heavy related symbolism that kicks in, about the ways in which torture tactics give birth to more terrorists. Without giving too much away, suffice it to say that the Internet saves innocent lives here. And the particular torture chamber house of horrors in Rendition is scary enough to give the more fictional horror fare this Halloween season, some stiff competition.