This is a high-flying war film told from the point of view of the first African American aerial combat unit to serve in World War 11. It’s real and it’s thrilling and if it wasn’t for the cheesy interaction that sandwiches the action together, it would be a masterpiece.

It’s Italy 1944 and the Tuskegee Airmen are only allowed to fly their fighter planes on local missions that offer no more exciting targets than the odd German truck. Colonel Bullard (Terence Howard) complains bitterly to his superiors about the bureaucratic discrimination that prevents his company’s participation in the real action and, finally, the Pentagon listens. His air corps are grudgingly offered the task of escorting 10 bombers over enemy lines and Colonel Bullard selects 13 of his best fighter pilots, which include Joe ‘Lightening’ Little (David Oyelowo), Emanuel Stance (Cuba Gooding Jr) and Marty ‘Easy’ Julian (Nate Parker). They paint the tails of their planes red and operation Shingle is a go. 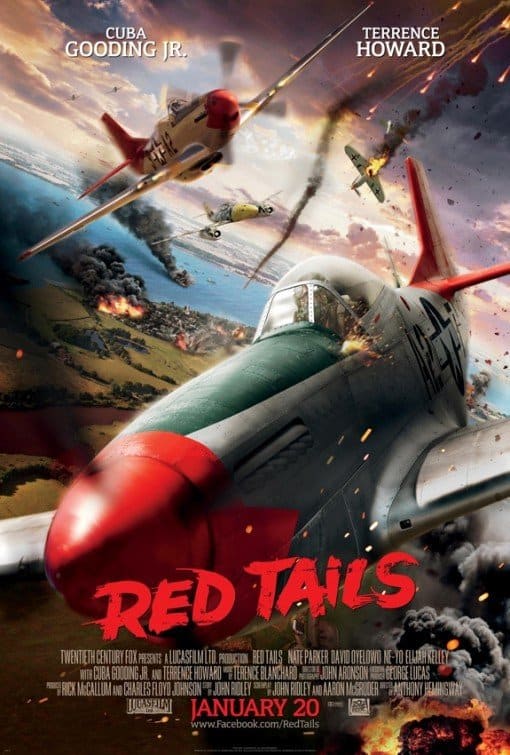 This story thrives majestically in the sky, and we are right there with our winged warriors when they soar like eagles, scouring the clouds for their swastika-embossed prey. We share their first glimpse of the enemy’s new kick-ass jets whose g-force will toss their flimsy planes like ping-pongs if they get caught in their wake. We also sense their blood-lust when they track a limping German plane back to base and watch as they swoop and destroy, time and again, not satisfied until the last of the Nazi arsenal is reduced to ash. It’s real and it’s tense and aerial combat at its most exhilarating.

Unfortunately, however, only the airborne world is created and when we get back down to earth, the magic vanishes and it’s melodrama at best. The most talented actor in the world can’t save lousy lines, and Terence Howard is forced to struggle under the weight of some pretty cringe-worthy speeches. The other characters fare no better and the humorous smart-talk that generally emanates when the guys get together is totally absent. We do, however, still relate to some of the characters but cliches and clunky dialogue make their emotions superficial and attitudes and behavior often change for no good reason other than the convenience of the plot.

The real-life heroes of this film achieved such spectacular success that they were as well known to their enemies as they were to their allies and their story is a hugely important one that needed to be told. But it should have been told a long time ago, when many of the soldiers were still alive, and before society acknowledged racism as taboo. Unfortunately, films like this make great cinema but stop us getting any nearer to the melting pot which, despite bastions falling, still seems to be a long time coming.