Watching the robots in this film duke it out in the ring is a total blast but, unfortunately, the futuristic boxing world where this story resides is never truly created. In its place is a lot of expensive gloss and hoopla with a plot that is predictable at every turn and it also shamelessly recycles concepts from every big fight movie that’s ever been made.

It’s 2020 and robot boxing has become a popular sport. Charlie (Hugh Jackman) struggles to make a living as a promoter and his final effort to balance the books fails when he bets more on his latest Bot than he’s actually got. Rather than face the consequences of his reckless behavior, Charlie decides to leave town and return to the gym where he originally trained as a boxer. Meanwhile, Charlie’s ex-wife dies and when he is offered $100,00 by his brother-in-law, Marvin (James Rebhorn) to relinquish custody of his 11-year-old son, Max (Dakota Goyo), he sees it as the answer to his problems and signs on the dotted line. However, Marvin wants to take his wife on a two month vacation to Italy so Charlie has to agree to take care of Max until they return. 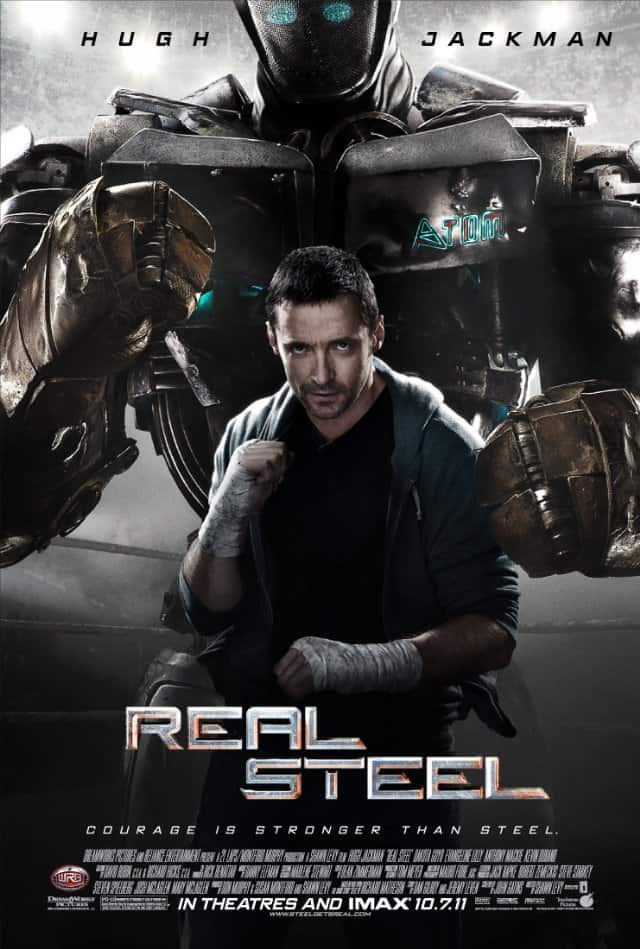 As soon as Charlie’s son makes an appearance, and Charlie shows he has no feelings for his offspring, it’s screamingly obvious that when the two spend time together, they will bond and want to stay as a family. So with the storyline smashed to pieces in the first ten minutes, the only hope for the over-informed-audience would be intriguing characters, surprise plot twists and dialogue that stirs strong emotions. Unfortunately, the characters are cliches, the plot uneventful and the only sign of emotion comes from the actors, who had presumably been given a strong whiff of ammonia in the last scene so they could ham up the cheesy ending with fake tears.

When we meet Charlie, his problem is that he accumulates debts and is reckless, but in the ‘big moment’ at the end of the film, he suddenly decides that he has a huge problem with ‘air boxing’ so the robot in the ring can follow his moves. Apart from the fact that any fool could manage something that simple, there has been nothing in the film to suggest that somewhere along the way Charlie has lost his courage, and the entire film flounders from the weightlessness of a resolution that has nothing to do with what has gone before.

Obviously Max has a lot of screen-time in this film, so it’s a pity no one bothered to find out how kids that age actually behave. FYI; they generally don’t instigate heart to hearts with adults they’ve just met, they don’t square up to international sports moguls and they never make smart life choices, which is just as well, as otherwise the producers would never have got one of them to accept a leading role in this hackneyed old script.