This is a fascinating documentary about Nim, a chimpanzee, who a behavioral psychologist tries to make human. The psychologist’s aim is to hold up a mirror to the animal that is man’s closest relative but in so doing he also holds up a mirror to mankind. And it’s not always pretty.

In 1973 Professor Herbert Terrace originated an experiment to discover how an ape would communicate if raised and nurtured like a human child. When Nim is just two weeks old, he places him with the first of a series of surrogate mothers where he is taught sign language. After a couple of years, Nim has a vocabulary of 120 words and he is totally ensconced in human life. When the experiment comes to an end, this beguiling little chap is unceremoniously removed from his palatial home and sent to live in a cage but, fortunately, he has had a huge impact on the humans he has met along the way and it is these people who come to his rescue. He is still only six years old when the rest of his journey begins. 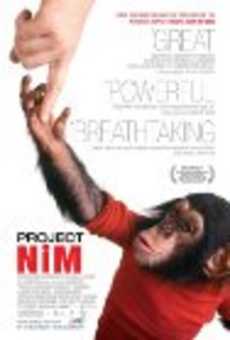 After five years of this experiment, Professor Terrace comes to the conclusion that, although Nim’s sign reading skills are spectacular, he only communicates to get what he wants, which isn’t giving the insights the research wants. He’s disappointed and decides to abandon the project, and also Nim, conveniently forgetting that he was the interloper who knocked down Nim’s mother with a tranquilizer and snatched her screaming baby from her arms. Terrace justifies his indifference to Nim’s future with a callous, “It’s the university who owns him, not me.” Doesn’t he sound just adorable?

Nim proves himself to be more than a worthy subject for this film. He is highly intelligent, mischievous, manipulative and endlessly entertaining. There are down sides, of course, and his jealous behavior towards his first surrogate mother makes life impossible for the entire household. He also possesses the most amazing instincts and when he realizes one of his carers is about to leave him for good, he lashes out uncontrollably, rewriting the adage that hell hath no fury like a woman scorned. It’s the chimps we should never take our eyes off.

There are many memorable moments in this story, the most entertaining being when Nim’s rescuers first come to his aid and get him a lawyer. The lawyer embraces his primate client with complete professionalism and comes up with the ingenious idea to take Nim into court, in his cage, so he can tell the judge in sign language that this is not where he belongs.