Conceived as an apparently judge-for-yourself investigation into the multi-faceted conspiracy culture that has become the foundation of the anti-globalization movement, the documentary New World Order seems to pride itself on bypassing the more prevalent, subjectively partisan political filmmaking, but really doesn’t offer anything substantial in its place.

An amalgam of vintage and rather meaningless political rhetoric from JFK to Joe Biden, with grassroots ‘9/11 was no accident’ conspiracy junkies weighing in too, New World Order also tosses together leftist anti-corporate/commercial media activists with right wing populist survivalists, and with no clear agenda in mind.

Other than perhaps pointing out the all too obvious objection both groups have to government rule, if not the filmmaker’s own emphasis on the common tendency towards nuttiness of their highly selective human subjects. So are rebel activists on the eccentric if not pathological side, or did they just cherry pick them that way for this documentary. Only the moviemakers know for sure. 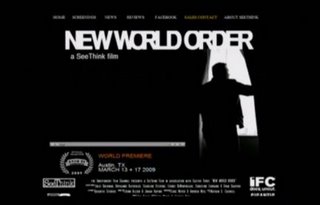 The most intriguing sections of New World Order are when the talking heads stop talking and go after their intended targets, such as tracking down the infamous Bilderberg elite cabal of politicians and corporate and media honchos around the world, accused here of attempting to orchestrate a hostile takeover of the planet’s resouces and populations during their secret meetings. But the filmmakers seem much more intent on focusing, not on the foxes but the hounds in pursuit, leaving most questions about these sinister gatherings solely to audience imaginations.

More conspiracy culture reality show than enlightening inquiry, New World Order is the kind of wag the dog passive filmmaking that allows the human subjects to take over the production, and lead audiences to not much of anywhere. Resulting in an unfortunate mere snapshot of formidable mass protest movements against socioeconomic tyranny evolving here and around the world, and the gravity of many of their concerns, in effect diminishing both their size and significance.